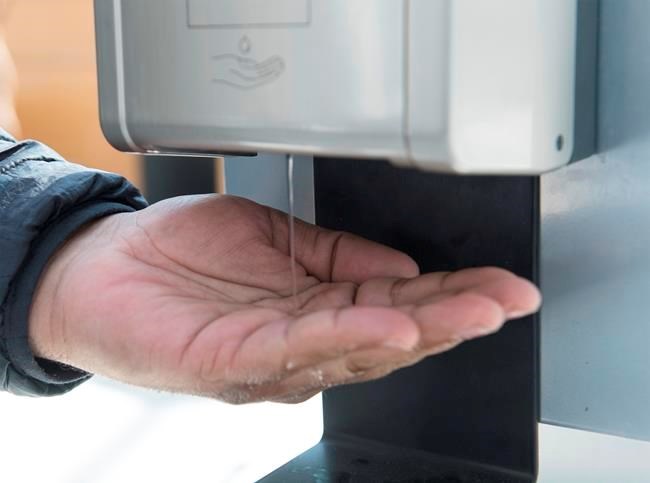 EDMONTON — Doctors at Alberta Health Services say people using hand sanitizer when they are out shouldn't leave it in their cars for too long because it could lead to a fire.

They said handwashing with soap and warm water is still the best way to prevent the spread of COVID-19, but they noted that's not always practical when outside the home or in a workplace.

"As such, many people are using hand sanitizer products as an alternative to hand-washing, when they are out and about," Yiu and McDougall wrote in Thursday's newsletter.

With hand sanitizer being in short supply, many breweries, distilleries and community-based companies have started making their own with high alcohol content, which they said should be between 60 and 90 per cent.

Yiu and McDougall said not to store any hand sanitizer in your car for long periods of time.

"With extended exposure to high temperatures, the alcohol in the hand sanitizer will eventually evaporate, causing it to lose its efficacy," they wrote. "Additionally, there is a potential fire risk to storing hand sanitizer in your car.

"In extreme heat, it can ignite due to its high alcohol content."

A spokesman with AHS said he doesn't know of any injuries due to hand sanitizer fires in Alberta, noting it's just a general warning from the doctors.

There have, however, been cases cited in medical journals — including one from 2011 of a health-care worker who was burned when she lit a cigarette after using hand sanitizer.

The National Fire Protection Association in the United States also issued a warning in mid-April about the possibility, although it noted there must be an ignition source for a fire to occur. It said spontaneous combustion is highly unlikely unless a vehicle were to reach extreme temperatures.

The chief fire marshal in Lethbridge, a city in southern Alberta, added his voice to the warning Friday.

"While hand sanitizer is great resource to protect against the transmission of COVID-19, there is an increased fire risk," wrote Heath Wright. "Alcohol-based hand sanitizers have a very low flashpoint (temperature at which its vapours ignite if given an ignition source) due to the percentage of alcohol required in these products.

"The flashpoint of hand sanitizers is approximately 20 degrees Celsius."

He suggested hand sanitizers be stored in a cool, dry place.

Health officials in Alberta also recommend people not ingest hand sanitizer and keep it out of the reach of children.

This report by The Canadian Press was first published on May 22, 2020

Note to readers: This is a corrected story. Previous versions misspelled name as Yui.

Liberals tap another military officer to replace Fortin on vaccine campaign
May 17, 2021 6:30 PM

B.C. residents who had AstraZeneca vaccine can choose second-dose vaccine
May 17, 2021 6:23 PM