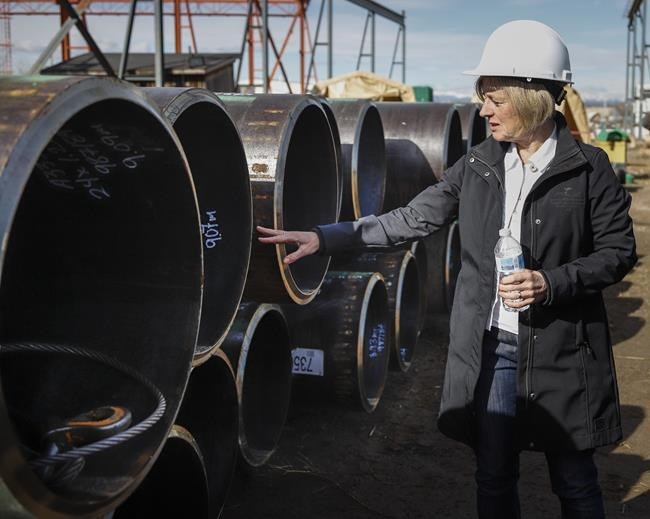 EDMONTON — Alberta Premier Jason Kenney should step in to reverse a decision by the province's energy regulator to suspend most environmental monitoring in the oilpatch, says the province's Opposition leader.

The NDP's Rachel Notley says if the United Conservative premier doesn't reverse the decision — which the regulator says was made because of the COVID-19 pandemic — it will cost jobs in the sector, as international investors shy away from an industry increasingly seen as an environmental outlier.

"(Wednesday) was a very bad day for people who care about our air, land and water," Notley said Friday.

"The only people it was worse for were the people in Alberta who care about maintaining any kind of job or economic security within the oil and gas sector. It's Albertans who need the jobs in that sector who will pay the price."

On Wednesday, the Alberta Energy Regulator expanded previous monitoring suspensions for open-pit oilsands mines to include the entire oilpatch.

Most soil and groundwater monitoring is gone. In-situ oilsands operations no longer have to do wildlife, reclamation and wetland monitoring, including research.

Most suspensions have no sunset date.

Martin Foy, the regulator's vice-president, has said the decisions were made to protect monitoring workers and the small communities they visit.

"The idea that we can force workers to work elbow-to-elbow at packing plants, have servers walk through restaurants with 50 people in them, but somehow it's unsafe for environmental monitoring experts to go out and test water and air?

"It's the most ridiculous assertion I've ever heard."

Notley pointed out that concerns over environmental regulation in Alberta's oilpatch were behind recent decisions of two of the world's largest investment funds — Blackrock and Norges Bank — to restrict investments there.

Earlier this week, a U.S.-based investment research firm came to a similar conclusion.

"The Alberta government has become the oilpatch’s own worst enemy by weakening environmental monitoring and oversight to the extent that foreign investors and foreign companies alike face reputational risks by investing in oilsands companies and projects," said analyst Jackie Cook of Morningstar.

"It's an independent regulatory body that makes its own decisions without direction from government," he said.

Notley said the premier has plenty of authority to roll back regulatory rulings.

"They have every ability to direct the AER to undo this short-sighted and damaging decision."

"Jason Kenney has to take responsibility for his extreme political decisions," said Notley.

"Now we're left with the Wild West of environmental protection and oversight in Alberta. This is ideological, it is thoughtless and the long-term consequences are going to be very poor for our industry."

This report by The Canadian Press was first published May 22, 2020