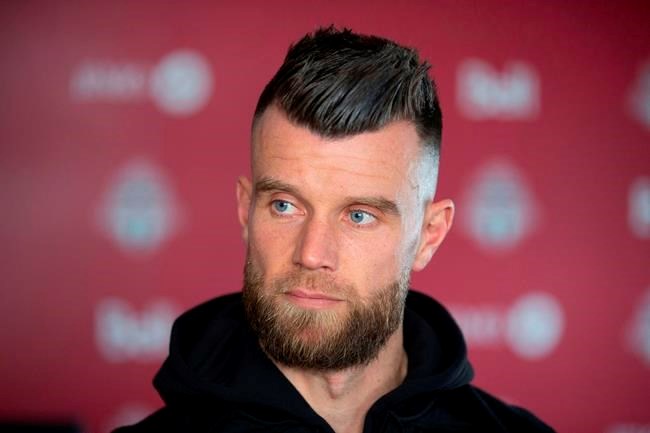 SEATTLE — With Quentin Westberg expected to start in Sunday's MLS Cup final, Toronto FC will have used three different goalkeepers in its three trips to the championship game over the last four seasons.

Seattle's Stefan Frei knows all about Toronto's revolving door in goal. He was part of it during his five-year stint north of the border.

Frei will make his third start in four seasons in the championship game, all against Toronto. Clint Irwin, Alex Bono and Westberg will have shared TFC's championship game starting duties over that series.

After three years as Toronto's starter, Frei lost his job to injury in 2012 and the fine play of Joe Bendik in 2013. That essentially set off a domino-effect on TFC goalkeepers that has continued into the 2019 season.

In December 2013, with Frei's US$200,00 contract expiring, Toronto dealt its onetime vice-captain to Seattle for a conditional draft pick while rewarding Bendik with a new deal.

Frei, who played under seven managers at TFC, was Toronto's all-time leader in appearances across all competitions (99) at the time. Frei has gone on to play more than 30 regular-season games in each of his six seasons with Seattle — 191 matches in total.

Here is a look at the TFC revolving door for 'keepers since Frei's arrival.

Frei was the undisputed No. 1, playing 26, 28 and 27 regular-season games respectively. But a deep bruise to the bone by Frei's knee in 2011 opened the door to backup Milos Kocic (who played eight games that season).

One game into the season, Frei broke his left fibula near the knee in a freak training accident — catching his leg in the grass while going after a ball during a wet training game at BMO Field.

Because of the break, a ligament near his ankle was put under stress and ruptured. That, in turn, put pressure on the tibia, which separated slightly from the fibula near the ankle. Frei had surgery to repair the ligament and insert two screws to tighten the two bones.

Frei had started the opening leg of the CONCACAF Champions League quarter-final against the Los Angeles Galaxy but Kocic had played both games since.

Kocic, whose season was complicated by the arrival of triplets late in the season, played 27 regular-season games in 2012. Toronto brought in Bermuda international Freddy Hall on trial with only 17-year-old Quillan as a backup.

Kocic was traded to Portland after the 2012 season, along with forward Ryan Johnson, in exchange for Bendik and the third overall pick in the 2013 SuperDraft (which turned out to be Kyle Bekker) and allocation money.

Toronto had yielded a franchise-worst 62 goals in compiling a league-worst 5-21-8.

"And it is finally here... I have been waiting for 2013 since last March. It's going to be a good year," he tweeted

But injury struck again. In February during TFC's first pre-season game in Florida, Frei got clipped by the boot of Columbus rookie striker Ryan Finley as he dove for a ball.

"Besides a very bent nose at the moment, we don't know," manager Ryan Nelson said of the initial diagnosis.

Frei had surgery in Orlando two days later, returning to practice wearing a protective mask to shield his surgically repaired nose. Bendik took advantage of his opportunity to play.

"Nobody's guaranteed a spot here and everybody understands that," said Nelsen.

Bendik played 33 regular-season games in the 2013 season. Frei played one.

In September, Toronto acquired Chris Konopka from Philadelphia in advance of the league roster freeze in September, all but signalling the end for the more expensive Frei. Bendik and Konopka were both on $46,500 that season.

Asked if it was fair how he lost his job, Frei replied: "That's a question you're going to have to ask the head coach. He was the one that made that decision.

"I tried to stay professional, tried to work my butt off in training. That was pretty much all I could do. And that's all I'm going to say to that."

As Nelsen liked to say, possession is nine-tenths of the law.

The Cesar loan was a marriage of convenience. He had fallen down the depth chart at Queens Park Rangers and needed games to stay on track to start for Brazil and the World Cup. For Nelsen, it was a chance to get a seasoned world-class goalie at a reduced price.

The veteran Brazilian had won five Italian titles, seven Italian cups, the Champions League and the FIFA Club World Cup. He was named Serie A Goalkeeper of the Year twice and nominated for the Ballon d'Or award in 2009.

Bendik took a backseat to the popular Cesar before returning to his No. 1 role in July when the Brazilian left with a unspectacular 3-4-0 record and two shutouts.

What comes round goes round.

Konopka took over as No. 1 after filling in for Bendik while he was sidelined by a foot injury early in the season. Konopka ended up playing 21 games to Bendik's 13.

At the end of the season, Toronto declined Konopka's option and sent Bendik to Orlando City for a conditional draft pick.

"Thank you Toronto for an awesome 3 years!" Bendik tweeted. "It has been consistently entertaining to say the least!"

Toronto had looked to the future by taking Syracuse's Bono sixth overall in 2015 SuperDraft.

In January, Toronto acquired Irwin via trade from Colorado to further shore up a defence that had given up a league-high 58 goals the previous season.

Irwin, an MLS all-star the previous year, was the fourth significant acquisition for Toronto this off-season following the arrival of centre back Drew Moor from Colorado, right back Steven Beitashour from Vancouver and Canadian midfielder Will Johnson from Portland.

TFC gave up a 2016 third-round draft pick, a conditional 2017 first-rounder and targeted allocation money to get Irwin, who had 25 shutouts in 92 appearances in all competitions for Colorado over the last three seasons.

Irwin made $97,000 the season before, a cap-friendly amount for a starting 'keeper. But his starting role was interrupted by a quadriceps strain in late June.

Toronto rewarded Irwin with a new contract in February, giving him a two-year deal with an option.

But Bono grabbed the starting job and hung onto it after Irwin went down with a hamstring strain in March sustained after his left foot jammed in the wet BMO Field turf as he came out to make a save.

Bono played 29 regular-season games while Irwin saw action in five. Bono was in goal for five playoff games including the MLS Cup win.

Bono, the undisputed No. 1, started 27 games with Irwin accounting for the remaining in seven.

In November, Toronto declined Irwin's contract option before trading him back to Colorado the next month for a second-round draft pick. With a salary of $221,300, he was expendable.

Bono started the season as No. 1 with Toronto bringing in Westberg, a veteran French-born American.

Bono started the first four games before Westberg was handed his first start in Seattle in April. The two split the next two games then Westberg took over, playing the next 25 matches.

Westberg, listed at six foot one, has proved to be Mr. Reliable and is seen as one of the best distributors of the ball in the league.

"As for their goalkeepers, they've gone through a few throughout the years. I think they're always had good pieces. I don't know why they're moving on from them," Frei said of Toronto.

"What their goalkeeper now has shown is very good. He's a shorter goalkeeper but very very athletic, very explosive. He's very confident with his feet and that's obviously a big aspect in the modern game. Nothing but respect for him, I think he's a good goalkeeper. I hope we can put a couple past him on the weekend. But as a goalkeepers' union member, you want to see goalkeepers get a fair chance."

This report by The Canadian Press was first published Nov. 8, 2019.