Another race and another Penske victory with IndyCar win 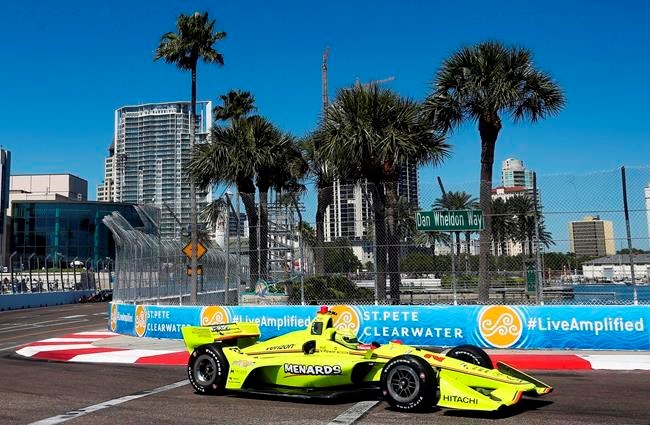 Newgarden crossed the finish line on the downtown streets of St. Petersburg at almost the exact same time Ryan Blaney, another Penske driver, led the field to green in the NASCAR race at Phoenix. Team Penske won consecutive NASCAR races, two Supercars races in Australia and now a showcase on the IndyCar schedule.

The organization is off to such a strong start that Penske acknowledged his three-driver IndyCar lineup arrived at the opening race feeling pressure to match their counterparts.

Will Power and Newgarden delivered in qualifying by sweeping the front row, then Newgarden used tire strategy to put his Chevrolet out front.

"So proud of our group, we have the best of the best working for Team Penske," Newgarden said. "There's a lot of pressure at Team Penske, everybody is rising up, and we joined the group today."

It was the 204th victory in IndyCar for a Penske driver.

Scott Dixon finished second in a Honda for Chip Ganassi Racing but was stymied by lapped traffic in his bid to catch Newgarden.

"You know the lapped traffic is trying to stay on the lead lap," Dixon said. "I thought we had a run on Josef, but once we caught the traffic it wasn't enough."

Felix Rosenqvist was the breakout star of the race by finishing fourth in his IndyCar debut. The Ganassi rookie from Sweden led 31 laps and used a strong pass on Power on a restart to move to the front. He was taken out of contention for the victory during pit stops and just missed a podium finish in his debut.

"We are starting off the season better off than anyone could have expected," said Rosenqvist, winner of three Indy Lights races in 2016.

The race finished with Penske and Ganassi, the two top teams in IndyCar, on top of the standings and the final scoring tower. Alexander Rossi was fifth for Andretti Autosport, James Hinchcliffe of Oakville, Ont., finished sixth for Arrow Schmidt Peterson Motorsports and Simon Pagenaud, the third driver in the Penske lineup, was seventh.

The race was slowed by only two cautions, the fewest in the 16-year history of the race.

Sebastien Bourdais' shot at a third consecutive victory ended 11 laps into the race with a mechanical problem.

Bourdais has called St. Pete home since he returned from Europe when his Formula One career ended after the 2009 season and has grown into the unofficial ambassador for the city and the showcase IndyCar event.

His back-to-back victories the last two seasons were a point of pride for both Bourdais and the city of St. Pete.

IndyCar will make its debut at Circuit of the Americas in Austin on March 24th.