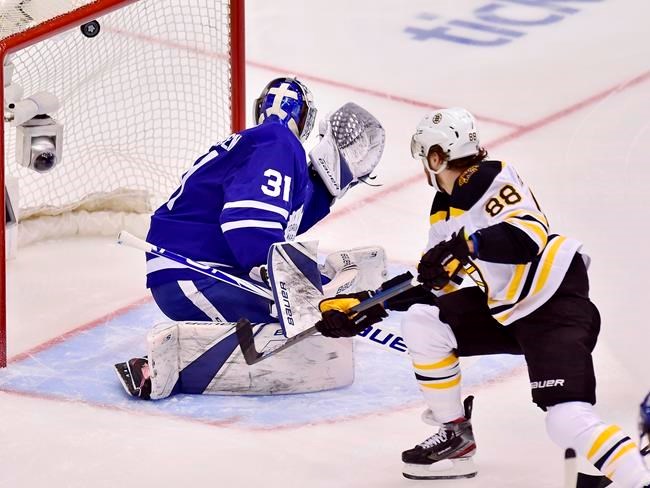 BOSTON — Mike Babcock's frustration didn't stem from the Boston Bruins scoring on the power play — it was how the sequence unfolded.

The Maple Leafs had gone over their opponent's lethal man advantage earlier in the day, pointing out the Bruins' ability to suck penalty killers in before striking.

So when Charlie McAvoy snapped a shot past Frederik Andersen to finish off a crisp three-way setup, giving Boston a 1-0 lead early over Toronto in an eventual 6-4 victory that evened the best-of-seven Eastern Conference quarterfinal 2-2, Babcock had reason to be annoyed.

"It's easy to sort out," the Leafs' head coach said Thursday on a conference call with reporters. "We didn't sort it out on the top and they ended up outnumbering us on the bottom ... we gave up an easy one.

It was the first of a couple crucial mistakes largely pinned on a lack of attention to detail that would cost Toronto dearly in its failed bid to grab a 3-1 stranglehold on a series that now shifts back to Boston for Friday's Game 5.

The Leafs pinched a few times when they shouldn't have Wednesday, lost a couple Bruins at key moments in the defensive zone, allowed a second power-play goal thanks to some lax coverage and, despite mostly owning even-strength proceedings, squandered too many chances at Scotiabank Arena.

They mostly played well. And they lost.

Focus now pivots to a return to Boston's TD Garden — a venue where the Leafs dominated Game 1 and were dismantled in Game 2.

"It's a real good opportunity for our group," Babcock said. "To get to where we want to go, we've got to push through and overcome opportunities like we're about to face.

"It's all about growing as a team and building a program here that has a chance each and every year."

But to have a chance to move on when they host Game 6 of the series back at Scotiabank Arena on Sunday, the Leafs will need avoid the silly mistakes that plagued them Wednesday.

Finding an answer to the Bruins' power play wouldn't hurt either. Boston, which ranked third on the man advantage in the regular season, is 5-for-11 through four games. The Leafs' penalty kill operated at just 66.7 per cent in last spring's seven-game defeat to the Bruins at the same stage of the playoffs, and wasn't much better at 70.6 per cent in the first round in 2017.

"It isn't good enough right now," Babcock said following Game 4. "The great thing about it is the series isn't over so we don't have to live with that number.

Toronto did a good job limiting the Bruins' big line of Brad Marchand, Patrice Bergeron and David Pastrnak through the first nine periods of the series, holding them to just six points, and only two at 5-on-5.

But Boston head coach Bruce Cassidy lit a spark under his stars in Game 4, moving Pastrnak off the unit most of the night as the talented trio exploded for six points.

Finding another answer will be crucial for the Leafs on Friday, or they could be facing elimination when they return home.

"We feel great about our team and our game," Leafs centre John Tavares said Wednesday night. "You always want to clean things up and be better.

"This time of year it's very small differences so just stay with it and build off the good things."

For his part, Babcock has liked his team's approach in three of the four games.

The Leafs will need at least two more good performances to advance.

"We're excited about our opportunity," Babcock said. "We just made too many critical mistakes (in Game 4).

"We can't make those mistakes."

If they do, a franchise that hasn't won a playoff series since 2004 will be packing its bags for another early summer.