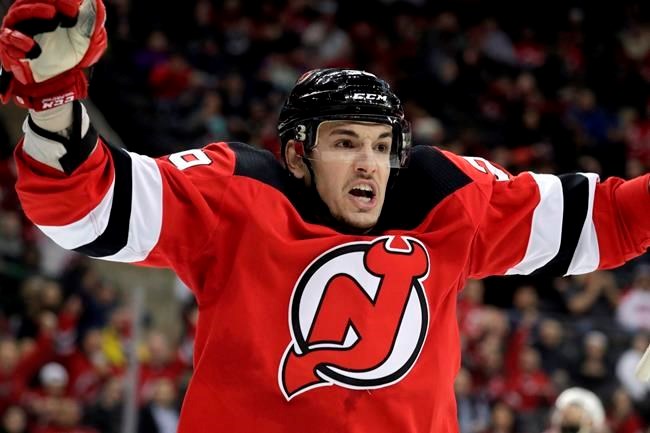 NEWARK, N.J. — If the Montreal Canadiens don't make the , they can blame the lowly New Jersey Devils.

Three games. Three losses. And only one point for a team fighting for its playoff life.

Monday night's 2-1 defeat might have been one of the low points all season for Montreal. With the Canadiens needing a win to improve their hold on the top wild-card spot in the Eastern Conference, last-place New Jersey beat them with a lineup that included seven players who spent the majority of the season with the Devils' top minor league affiliate.

"We just didn't start on time," Montreal coach Claude Julien said. "We didn't play well enough to win a hockey game. This time of year you have to play 60 minutes and we didn't do that."

Nathan Bastian scored his first NHL goal and Kurtis Gabriel got his second. Recently acquired Connor Carrick set up both goals and Cory Schneider made 34 saves to cap the Devils' best season series against Montreal since going 3-1-0 in 2011-12.

"When you have young guys called up and guys in the lineup due to injury or trades, you need people to step up," Schneider said. "The top line was getting keyed on, so to have guys step in and contribute like that was huge. We're going to need everyone to contribute. Win or lose games like tonight, we can live with this effort and that compete level."

The Canadiens still hold a one-point lead over Carolina and Pittsburgh for the first wild card in the East, but the Hurricanes and Penguins now each have a game in hand.

"Every single game from here on out will be absolutely huge," Montreal Max Domi said. "We've got to find ways to win as many games as possible. We're going to try and win every game, obviously. We're going to leave it all out there."

Paul Byron scored a short-handed goal for Montreal, and Carey Price made 20 saves.

Trailing 2-0 and with the Devils on a power play, the Canadiens got back into the game on a great individual effort by Byron, who recently returned to the lineup after missing six games with an arm injury.

Byron picked up a loose puck near his own blue line, outskated Damon Severson into the Devils zone and beat Schneider with a shot to the top corner at 6:30 of the third period.

Montreal threatened in the final 13 minutes but Schneider made excellent saves on Domi and Brendan Gallagher on a power play in the last 10 minutes. Schneider's best save might have been a stop on a short-handed breakaway by Artturi Lehkonen in the first period.

Bastian, recalled from the minors Sunday, tipped Carrick's shot under Price's pads at 12:35 of the first period. He made his NHL debut on Jan. 19 and this was his second game.

"Being a big guy, I pride myself in being big and strong and good around the net," Bastian said. "Sometimes when you tip it, it goes in, and sometimes it doesn't. I was lucky enough to get it through Price's legs."

Gabriel, who scored his first NHL goal against Ottawa last week, got his second by tipping a shot from the point by Carrick at 3:06 of the second period and putting in the rebound.

"That's the kind of goal you feel good getting to the net and rewarded for your hard work on it," Gabriel said. "That's why you saw the exuberance and celebration. The first one I didn't see go in. To be able to contribute and get a game-winning goal in a big game against that team, it's great."

Canadiens: Play the second of back-to-back road games in Detroit on Tuesday night.

Devils: Play the second of a three-game homestand Wednesday night against Calgary.