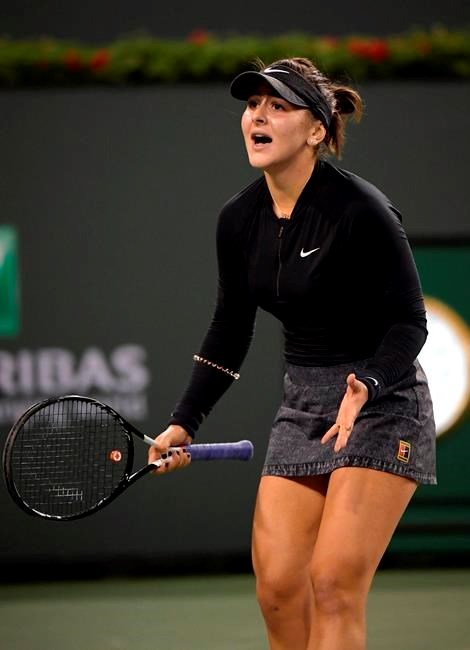 INDIAN WELLS, Calif. — Bianca Andreescu's dream run will take the Canadian teen to the final of the BNP Paribas Open.

Andreescu will play No. 8 Angelique Kerber of Germany in Sunday's final. Andreescu has knocked off four seeds at the tournament.

Andreescu, who started the year ranked 152nd in the world, will climb into at least the top 35 next week after yet another deep run at a WTA Tour event. The Canadian is now 27-3 on the 2019 season.

Andreescu, a wild-card entry at Indian Wells, beat a top 50 player for the ninth time this year.

Kerber ended 23rd-seeded Belinda Bencic's run of upsets with a 6-4, 6-2 victory in the second semifinal.

"Kerber is an incredible fighter. She redirects her shots. Like, she can hit any shot at any time in any specific place whenever she wants. She has a pretty decent serve. She's a good mover, great fighter," Andreescu said.

The teen's run is reminiscent of Naomi Osaka's path to last year's title. Little known at the time, Osaka used her Indian Wells victory as a launching pad to beating Serena Williams for the U.S. Open title and winning the Australian Open while becoming the world's top-ranked player.

Leading 4-3 in the third set against Svitolina, Andreescu found herself down 0-40 before winning five points in a row for a huge hold.

Andreescu missed a match-point opportunity on Svitolina's serve, but then won the next game to finish it in dramatic fashion, fighting off three break points. The Canadian finally won it on the fourth match point.

Andreescu had 36 winners to Svitolina's 14. The Canadian had 57 unforced errors, though, while Svitolina made 29.

Andreescu showed signs of fatigue in the third set. Andy Bettles, Svitolina's coach, told his player "She's dying physically" during the break after the fifth game of the set.

Svitolina, the 2017 Toronto Rogers Cup champion, responded with a break to tie the third set at 3-3. The players then exchanged breaks before Andreescu won two games in a row to go up 5-3.

After losing her first two service games and falling behind 3-0, Andreescu stepped up and won six games in a row to take the first set in stunning fashion.

The Canadian recorded another break to open the second set, but Svitolina bounced back in the next game with her own break and then won three more games in a row to take charge.

"(The) match had a little bit of up and downs," Andreescu said. "I started a bit slow and then I picked it up after 3-Love, thank God. Svitolina took control of the second set. I started missing more. Then in the third set I kept my composure, at least tried to. I pumped myself up."

The Ukrainian said she was bothered by an inflamed right knee.

"I couldn't allow myself to play 100 because my movement was not there," she said.

Meanwhile on the men's side, it's Federer vs. Nadal again, only this time it'll be in the semifinals.

Nadal stands in the way of Federer's pursuit of a record sixth title at Indian Wells.

Still, the Swiss superstar was rooting for Nadal to advance against his 22-year-old opponent.

"Playing against young guys to eventually get to Rafa, that's exciting," said Federer, who also faced an opponent the same age as Khachanov.

Nadal's right knee flared up in the second set for the first time during the tournament. He called for a trainer who applied tape just below the knee. The trainer returned again with Nadal leading 3-2 in the second set.

"My goal and my idea is be ready for tomorrow," Nadal said. "I cannot guarantee how I'm going to wake up tomorrow morning."

Knee problems have dogged the 32-year-old Spaniard in recent years, and they cut short his 2018 season after the U.S. Open in September.

"I love to play on hard (courts), but probably my body doesn't love it that much," Nadal said. "As I say before, is not only about today, is about tomorrow. Maybe we're going to pay the price at the age of 45 or something. That will be not nice. When I see some old legends walking around the tour, is tough to see."

Federer is on a five-matching winning streak against Nadal, who lost to him all four times they played in 2017, including the last time at the Shanghai Masters in October of that year.

"You look back at what I did well there, but you can't just copy-paste and play exactly the same thing again," Federer said.

Nadal improved to 6-0 against Khachanov, although it was tougher and longer than Federer's win.

Nadal trailed 6-5 before Khachanov's forehand error forced the second tiebreaker, which Nadal dominated to close out the match that lasted just over two hours.

"He's unbelievable in ," Khachanov said. "When you want to try maybe just to play more safe then he suddenly steps in and he counterattacks. He steps in and then he starts moving you, and then you are again in trouble."

Federer believes Nadal is playing better than he did in losing the Australian Open final to Novak Djokovic, who was upset earlier in the week.

"When Rafa is healthy, especially in a place like here in Indian Wells where he feels comfortable, he's clearly very tough to play," Federer said.

Against Hurkacz, Federer fought off two break points in the second set, including the last game when he closed the match with a forehand winner off a short ball.

"Not that I didn't expect it," Federer said, "but it definitely went better than I thought it would."

— with files from The Associated Press