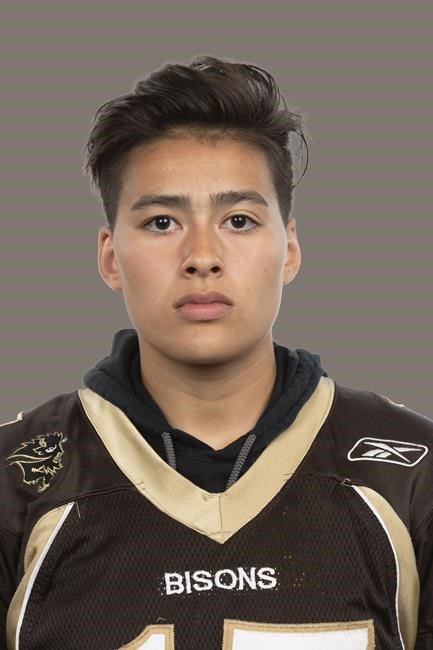 The five-foot-seven, 160-pound defensive back is entering her third year at the University of Manitoba, having been a red-shirted player on the Bisons in 2018.

Red-shirted players, who practise but do not dress for games, usually aren't in the spotlight. However, it's a different story for the 19-year-old Iizuka, who is believed to be the first woman to appear on a U Sports football roster.

The well-spoken native of Mississauga, Ont., applied to Manitoba in 2017, but wasn't on the roster her first year, working out with the team while she recovered from a knee injury.

Iizuka sees herself as a football player first, but understands how others can consider her a trail-blazer and pioneer in her chosen sport.

"I'm someone who plays the game but I also realize with that will be responsibility," she said during a telephone interview. "I'm just a player but at the same time I'm that (pioneer) as well.

"It's something I aspire to be. I don't think I'm mentally there yet, but I'm working hard to become that."

"Honestly, it's really humbling because I feel like I'm the baby in the room," Iizuka said with a chuckle. "There are just so many qualified professional women ... and to be in the same place as them, hopefully I can learn a lot."

Bisons head coach Brian Dobie made it clear Iizuka had earned her spot in his program. That's quite a statement from the winningest football coach in school history (92-90-1), who is entering his 24th season at Manitoba.

"I didn't do this to make a political statement that I'm going to be the coach or we're going to be the program that's going to give this young woman a chance and be a breakthrough," Dobie said. "I brought her here because of her drive, passion and determination and she had the skill level and experience to back it up.

Dobie, 66, fondly remembers watching Iizuka for the first time while serving as a guest coach at a summer football camp in the Toronto area. Her rapport with Dobie was a key reason she chose Manitoba.

"I was at a tackling drill and there was a player who made two or three impressive tackles in a row," Dobie said. "I literally turned to one of the coaches I was standing beside and said, 'Wow, he's a really good tackler.'

"And he replied, 'Yeah coach, that guy is a girl.' So she went to the back of the line and I went over and gave her a coaching tip and we had a brief chat. We talked again at lunch and I was immediately struck by her passion and drive for being the best player she could and taking it as far as she could. She was really impressive."

Iizuka immediately reminded Dobie of another passionate athlete — his daughter, Caleigh, who was a member of the Manitoba women's volleyball team that won a Canadian university championship in 2014.

"The difference? She faces a huge uphill battle because her sport is literally loaded from top to bottom with men."

The biggest challenges Iizuka faces are physical, given many of her male counterparts are bigger, stronger and faster. But Dobie said Iizuka easily matches her teammates' work ethic, football intellect and heart.

"She works really hard and does all the right things," he said. "She sits at the very front of our classroom every meeting, she's literally in the front row and taking notes.

"I wish all of our guys would be in the front row taking notes, honestly."

Dobie said the majority of Bisons players are good with having Iizuka aboard. And he has a simple message for the few who might not be.

"She has earned her position to this point as much as anything because of her attitude," said Dobie, whose program has produced NFLers Israel Idonije and David Onyemata. "Not everyone in our program is a first-team all-Canadian and going to the NFL or CFL.

"We have players who'll be challenged as they go through their university career to ever start but they're here because they're workaholics and have great attitudes. Reina can stand in that room and certainly say, 'Look, the role I play here is an important role."

Iizuka played minor football with boys in both Mississauga and Toronto growing up and said she's never had an issue gaining acceptance from her male counterparts. However, Iizuka often felt she had more to prove on the field.

"Just because I'm a girl, I think some people are going to test you differently," she said. "I'm tenacious and I think I have a strong mentality ... Yes, it's been difficult but at the same time I've really enjoyed the process. I love training, I love studying film and I really love the connections I've been able to make with people in the community."

As for the biggest challenge she's faced, Iizuka said that's come from within.

"It was realizing at a young age I could only control what I could control and within that try to optimize all the potential and opportunity in front of me," she said. "The physical is a given, biologically it's what it is.

"I realize you have to maximize your gifts and being a female I think I have a different perspective on things. I'm pretty agile and quick but I think liking to learn the game is the strength I have and it's important to capitalize on that."

Ultimately, though, it will be up to Iizuka to determine whether she's able to play for Manitoba. Dobie, for one, isn't betting against her.

"Can she make her way through that group and get to the top 50? It will be extremely difficult, no question, but she's overcome a lot just to get here.

"We have this conversation all the time. She's the first to say she's a football player and not a woman on the football field. OK Reina, then you have to go prove it. You have to go out there and face all the bullets that are flying around, that's no different than anybody else."

Iizuka, for one, believes she has the ability to play for the Bisons.

"Oh, no doubt," she said. "We have a great team and everyone coming into the program is good enough to play.

"Even if it's for one game, I see it happening. I guess the worst that can happen is I learn a lot about football and don't get on the field. At the same time, that's not bad at all."

Dobie said Iizuka will have many opportunities to remain in football after her university career is over.

"You could go to 200 football clinics and you wouldn't learn what you learn in a university program over that four-to-five-year period of time," he said. "I think Reina could end up having a career where she’s very impactful in the sport of football, I honestly do.

"I think this opportunity affords her the ability to become an expert in the sport of her choosing and should open doors for her to pursue many, many different paths and not discounting the ability to go further as a player but in other areas as well."