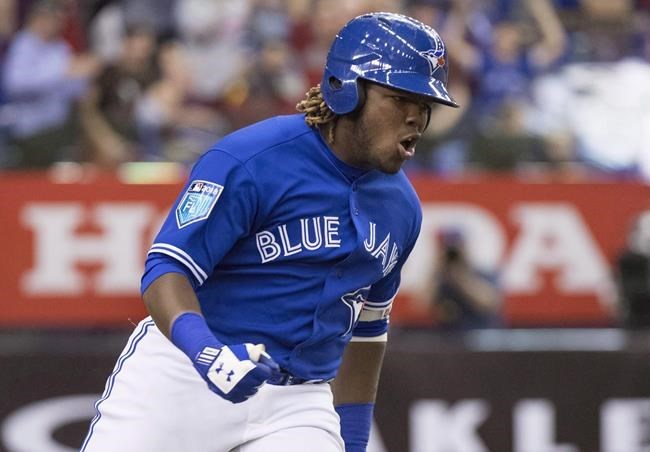 The team announced the injury to the 19-year-old third baseman on Sunday morning.

Blue Jays general manager Ross Atkins told media that Guerrero was hurt on Friday in a spring training game against the Pittsburgh Pirates.

The estimated three weeks of recovery would include the rest of the Grapefruit League schedule, the Blue Jays' exhibition series against the Milwaukee Brewers in Montreal — where Guerrero was born — and opening day of the regular season.

Guerrero played for four of the Blue Jays' minor league affiliates last season as he quickly worked his way up Toronto's depth charts.

He hit .381 with 20 home runs and 78 runs batted in over 408 plate appearances split between rookie league, high A, double A and triple A.

Before Guerrero's injury there was speculation that the Blue Jays would keep the third baseman in the minor leagues for the first 15 days of the season and delay his debut until at least April 12. By denying him 15 days of major league service, Toronto would delay his eligibility for free agency by a year, until after the 2025 season.

"Controlling what I can control and then working hard everyday," Guerrero said through a translator on Feb. 18 as the Blue Jays held their first full-squad workout of spring training. "Making the best out of it. Trying to get better every day and giving the best of me."

— With files from The Associated Press