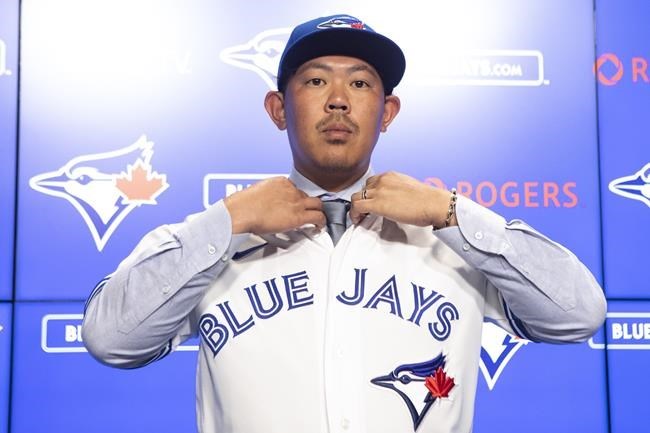 DUNEDIN, Fla. — Shun Yamaguchi is feeling like a rookie again as he begins his first spring training in the major leagues.

The 32-year-old right-hander, who starred in his native Japan for 14 seasons before signing with the Blue Jays in December, had his first bullpen session with his new team Friday at Toronto's newly renovated spring training complex.

"The first camp in Japan was when I was 18. I actually feel even younger now than when I first went into the camp in Yokohama," Yamaguchi said through a translator.

"Back then, there were a lot of things I knew from players who had played in the league already. For this camp, everything is new, I don't know anything. But my mentality right now is to not be afraid of anything over here."

Yamaguchi is one of many pitchers in Blue Jays camp this spring vying for a spot in a rotation that will look much different from the one that took the field for Toronto in 2019.

Anchored by the big free-agent acquisition of Hyun-Jin Ryu, Toronto's 2020 rotation is set to include newcomers Chase Anderson and Tanner Roark and a healthy Matt Shoemaker.

That leaves Ryan Borucki, who's currently sidelined with elbow tightness, Trent Thornton, Jacob Waguespack, Yamaguchi and a slew of others hoping to leave a good impression on the Blue Jays' brass over the next six weeks as Toronto searches for a fifth starter.

Yamaguchi, who also has experience as a reliever in Japan, has made it known what role he'd prefer.

"I obviously have the mentality of going in as a starter. I'm looking to win the competition there," he said.

"It has been my motto to be a starter since I was really young. That's one of the reasons why I want to start."

Blue Jays manager Charlie Montoyo had only seen video of Yamaguchi pitching in Japan before Friday's bullpen session and said he was looking forward to seeing him live for the first time.

"He's going to get a chance to compete for the fifth spot," Montoyo said before boarding a bus for Toronto's workout complex across town. "And again, talking to him, if he doesn't make the rotation, he'll be in the bullpen."

Yamaguchi will have to adjust to the game at the MLB level, where he'll face different types of hitters.

But he's up for the challenge.

"Obviously Japanese batters and American hitters have different strengths," Yamaguchi said. "As I prepare for my game, I would like to test some things out and see what works and what doesn't work."

Asked if there were any MLB ballparks he was particularly excited to visit, Yamaguchi said he wanted to impress in his own home stadium first.

"First of all I want to make a big name (for myself) at Rogers Centre in front of all the Toronto fans," he said.

Montoyo has a pretty good idea of how Yamaguchi can do that.

"Be nasty, get people out," he said with a smile. "That would be great."