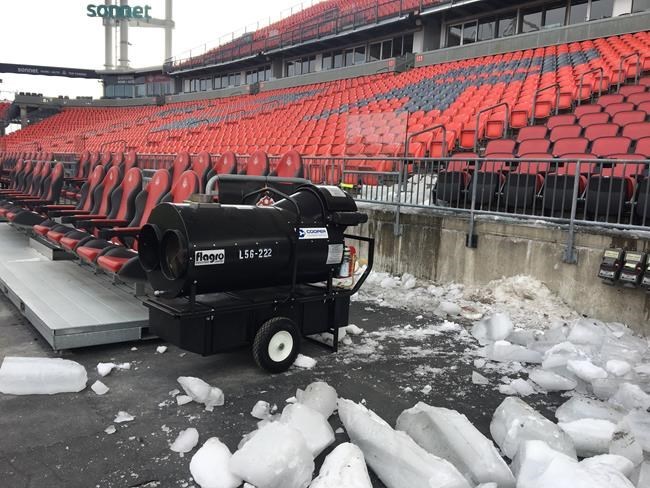 Toronto FC players and coaches like to have the grass field at BMO Field watered, so they can fizz the ball over a slick surface.

Watering the field in February in Toronto presents a problem, however.

"That's still a conversation," Robert Heggie, Toronto FC's head groundskeeper, said Monday. "We'll see. It's up to the team as always, but if it's minus-19 (Celsius) I'm not sure how effective that water's going to be at making the surface slick ... Because it's not going to remain water, it's going to turn to ice."

Coach Greg Vanney has already accepted that watering the field will not be possible, making for slow conditions.

"I was hoping (that would not be the case)," he said, "because we are a team that wants to move the ball fast. We do a lot of stuff on one- and two-touch and guys making quick decisions. The speed at which the ball moves is a big part of how we unbalance teams.

"It's a part of our identity and how we've built our team and our mindset," he added. "But (Tuesday) we switch. We have to take it for what it is."

The forecast calls for -10 C on Tuesday (feeling like -16) for the return leg of the CONCACAF Champions League round-of-16 tie between Toronto FC and Club Atletico Independiente de la Chorrera. Toronto lost the first leg 4-0 last week in the Panama heat on a dry artificial turf surface.

Last year it was 9 C when Toronto hosted the Colorado Rapids on Feb. 27 at the same stage of the competition.

After a 2018 season full of complaints over the BMO Field playing surface, Toronto laid new sod in November (a process delayed by a snowstorm). It also upgraded the drainage and heating system. Plus the club, which has a variety of covers for the playing surface, added to its supply of grow-lights.

In April, special machinery will stitch in hybrid roots that will serve to strengthen the grass.

BMO Field already has underground heating, meaning snow should not be a factor Tuesday.

"The heat's on," said Heggie, named Sports Turf Canada's sports turf manager of the year in 2015. "But what we don't want to do is have the heat so hot that the plant think it's July, because obviously it would be very unnatural for the plant ... It's kind of like standing in a hot tub ... but minus-19 from the waist up."

Being a groundskeeper is combining the skills of a scientist and that of a con-man.

"I'm trying to convince it that it's not the time of year that it is," Heggie said of his grass. "And it's very difficult because grass is growing under evolution. Millions of years told this plant this is what it should be doing at certain times of the year and we're trying to tell it the opposite. So obviously there are limitations when fighting Mother Nature like that."

Right now, Heggie is trying to convince the grass that it is May not frozen February. That's because there are still some cold nights in May which the plant has to fight off. If you get the plant to think it's June or July, it can't fight back in cold conditions because it doesn't expect them.

That's also one of the reasons his crew has to be judicious with its use of grow-lights. "We didn't want to have lush grass during the polar vortex," he explained.

Heggie believes the surface is "pretty good" for late February.

"I'm happy. This is where we thought it would be ... A little sand's kicking up here or there but It's holding together very well for my opinion," he said.

"It's not the best pitch. It's not in the greatest condition," he said. "But it is what it is."