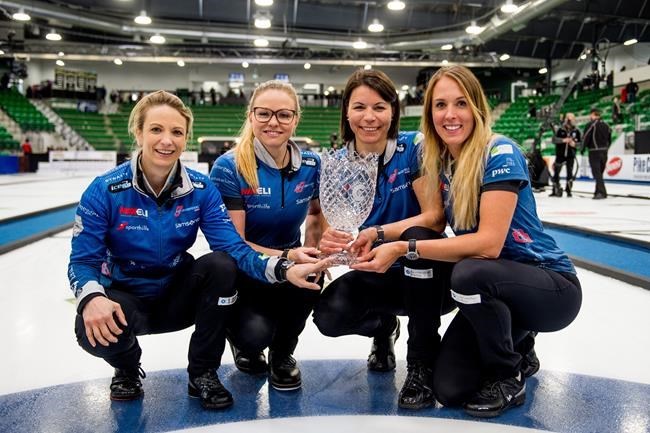 SASKATOON — Silvana Tirinzoni made some changes that paid off when it mattered most.

The Swiss team of Tirinzoni, Alina Paetz, who throws fourth, second Esther Neuenschwander and lead Melanie Barbezat defeated Kerri Einarson of Gimli, Man., 6-3 in the final of the Champions Cup on Sunday.

The Tirinzoni team worked quietly and methodically, never quite letting Einarson into the game. The team handled Rachel Homan much the same way in the semifinal on Saturday.

"It was a great finish to a great season," Tirinzoni said. "I almost don't know what to say... it's been such an amazing season with that team."

Tirinzoni reached her third Pinty's Grand Slam of Curling finals this season despite making changes to her foursome at the end of last season.

"It's hard to believe that it worked so fast," Tirinzoni said of her new team. "I thought it would take more time to adjust, but it has been a great start."

Meanwhile, Brendan Bottcher of Edmonton won his third consecutive event on the Grand Slam of Curling tour, with a 6-5 extra-end win over Kevin Koe of Calgary earlier in the day.

In the final, Tirinzoni broke a 2-2 tie with two points in the fifth end.

Einarson had a shot for two in the sixth end, but was a shade heavy on a tapback. Giving Tirinzoni the hammer and a one-point lead heading into the seventh end was too much to overcome.

Einarson applied pressure in the seventh end, with two counters when Paetz went to throw her last rock. She hit and stuck to go two up coming home.

It got interesting in the eighth end when Tirinzoni missed an open takeout, leaving Einarson with the second, third and fourth counters.

Paetz made two sensational takeouts to save the game.

"(Alina) played amazing," Tirinzoni said. "When you have her behind you making everything it is hard to lose. She was amazing today again."

Einarson and her team of third Val Sweeting, second Shannon Birchard and lead Briane Meilleur had a strong season on the bonspiel circuit. They won four consecutive World Curling Tour events in one stretch, and most recently captured the Players' Championship.

She vaulted to third on the world rankings, behind only Homan and Anna Hasselborg. Tirinzoni is fourth on the list.

After eight competitive ends in the men's final, Bottcher didn't need to throw his last rock in the extra frame after Koe was heavy with his attempt at a freeze with his final shot.

Bottcher and his Edmonton team of third Darren Moulding, second Brad Thiessen and lead Karrick Martin won the Meridian Cup in January in North Battleford, Sask., and the Players' Championship two weeks ago in Toronto.

Bottcher said he is ready for a break.

"I am thoroughly ready for summer," Bottcher said.

"I joked with my guys going into the extra that I was pretty sure we only have to throw two more shots each and then we are on summer break. Our season is so long these days. It's nice to get a little bit of a break."

While there were many twists and turns, Bottcher took control of the final with a three-ender in the second end.

"The three early really set the tone," Bottcher said. "From that moment on, they were always chasing."