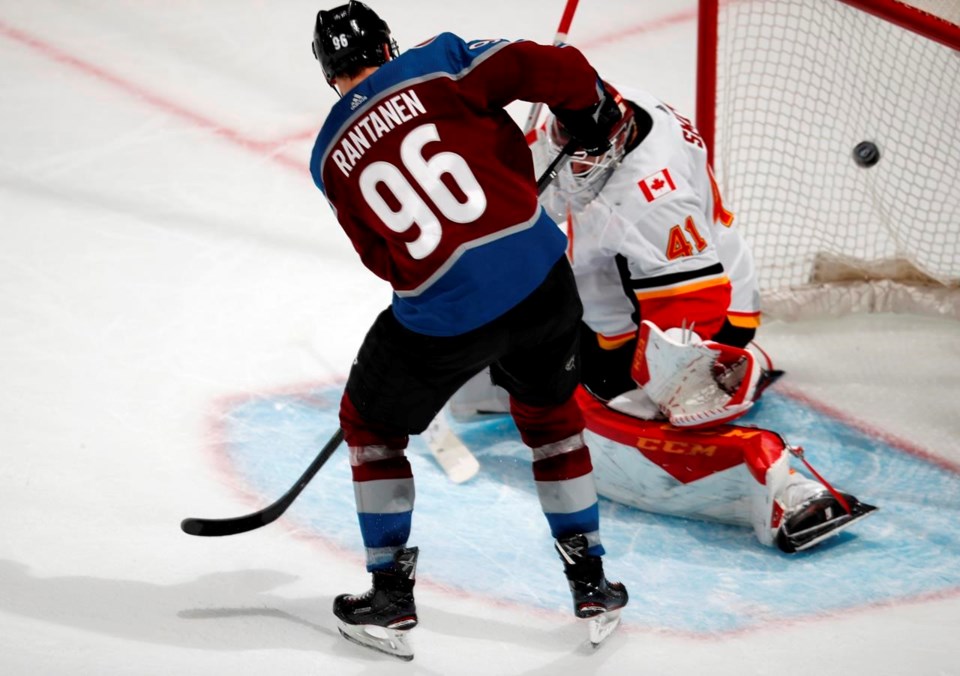 CALGARY — The saying "when eating an elephant take one bite at a time" applies to the Calgary Flames.

Facing elimination in Friday's fifth game of their opening-round playoff series against the Colorado Avalanche, Flames head coach Bill Peters doesn't want his players making the mountain bigger by thinking they have to win three games in a row.

Trailing three games to one in the best-of-seven affair, the team that posted the NHL's second-best regular-season record behind Tampa Bay is in danger of following the Lightning's quick playoff exit at the hands of a wild-card team.

"You can't stay alive in this series unless you win the next one, so that's all we're focused on is one game at a time and seeing where it can take us," Flames forward Matthew Tkachuk said.

"You have to do everything in your power to win this game. There's no saving it for next game because you don't know if there's going to be a next game."

The odds are against Calgary advancing to the second round.

After a 4-0 win to open the series, Calgary scored twice in each of its last three games. So the Flames could use more offensive support to complement the stellar performance of goaltender Mike Smith.

Averaging 43 shots against a game against after a league-leading 28.1 in the regular season, the Flames have leaned too much on the heroics of their 37-year-old netminder.

Up 2-0 and 2-1 in the third periods of the fourth and second games of the series respectively, Calgary is in a precarious position because the Flames didn't close them out.

Calgary didn't counter Colorado's speed — that shifts into a higher gear when Nathan MacKinnon is on the ice —in late-game pushes that produced that produced overtime wins for the Avs.

Peters said he watched Game 4's 3-2 overtime loss on the flight from Denver back to Calgary on Thursday.

"I liked the way we played, I liked the position we put ourselves in late in the third," the coach said. "Now we've got to make big plays when the game is on the line.

"I'd love to have our foot on the gas when it's two-nothing, two-one. I'd love to get that third one. A little bit of wiggle room for sure.

"We haven't scored enough. We've given up too many chances."

The top line of centre Sean Monahan and wingers Johnny Gaudreau and Elias Lindholm has been muted this series. Monahan has scored once and Lindholm has a power-play goal.

The Flames top trio has mustered a combined 30 shots on net in the series compared to 43 from Colorado's MacKinnon and captain Gabriel Landeskog.

When Calgary is in the offensive zone, the Avs have taken away time and space to generate quality shots and scoring chances.

"We need to hold onto pucks in the offensive zone," Calgary forward Derek Ryan said. "Their 'D' are jumping into the play every single time, so if we can get them to play defensively that wears them out.

"They obviously play their top guys so much. If we're able to put them in the d-zone for long periods of time, then that just results in wearing them out even more."

The Avs arrived at the post-season on the run going 8-0-2 to clinch the conference's final wild-card berth in the second-last game of their regular season.

The Flames didn't experience the same urgency, having locked down a playoff berth March 17 and top spot in the conference two weeks later.

But the Flames now find themselves the desperate team.

After its most successful regular-season campaign since the Stanley Cup-winning team of 1989, the summer will feel very long indeed if Calgary can't extend their season.

"We're coming back to Calgary on home ice. We've just got to win a game here," Monahan said.