Canada gets challenging draw for HSBC Canada Sevens with Fiji, Samoa and Kenya 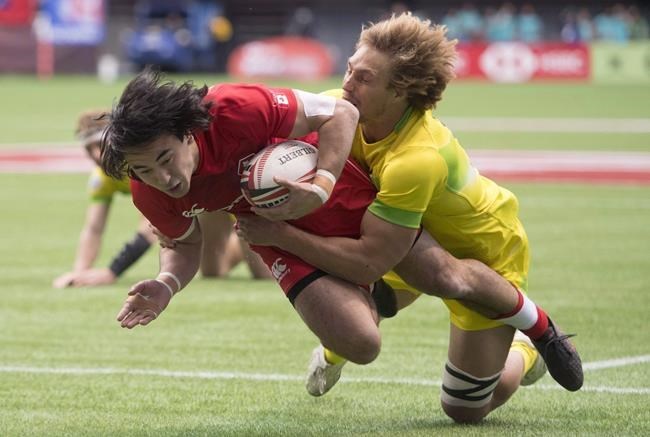 Canada has been given a challenging draw with Fiji, Samoa and Kenya in Pool B at the HSBC Canada Sevens this weekend at Vancouver's B.C. Place Stadium.

The Canadian men had hoped for a good finish on the weekend at the USA Sevens, to secure a more welcoming draw for its home tournament on the HSBC World Rugby Sevens Series.

But they finished 13th Sunday in Las Vegas. That put them in the fourth pot for the draw and kept them in 11th place overall after five events on the circuit.

Olympic and defending Vancouver champion Fiji, which has won stops in Cape Town and Hamilton, New Zealand, this season, stands third in the overall standings.

In-form Samoa, which lost 27-0 to the U.S. in the Las Vegas final, is seventh while hard-running Kenya is 15th. The Samoans beat Canada 26-19 in pool play at the USA Sevens.

Canada's goal is to finish in the top two of its pool, so as to advance to the elite Cup quarterfinals — meaning a top-eight or better finish.

So far this season, the Canadian men have tied for 11th in Dubai, Cape Town and Sydney. They tied for seventh in Hamilton, New Zealand, when they did make the Cup quarterfinals.

Pool A in Vancouver features the U.S., South Africa, Wales and Chile. Pool C consists of New Zealand, Australia, Spain and France while Pool D is made up of Argentina, Scotland, England and Japan.

The U.S., winners in Las Vegas after four straight losses in championship games this season, top the overall standings with 98 points. New Zealand, winners in Dubai and Sydney, is second with 93 points.

The top four teams at the end of the season secure automatic qualification for the 2020 Tokyo Olympics.

There was heartache in 2016 when the Canadians finished ninth. Canada won five of six games but only hoisted the consolation Bowl trophy instead of the celebrated Cup.

Its only blemish was a loss to Wales on a try scored with no time remaining. The Canadians failed to advance to the Cup quarterfinals on points difference.

Canada made the Cup quarterfinals in 2017, losing 36-7 to South Africa and eventually tied for seventh.

A two-month labour dispute ahead of this season did little for Canada's preparation. More recently, inclement weather made Langford, B.C., a less than hospitable training base. Canada has also been hit by injuries.

The popular two-day Canadian event has drawn 213,630 spectators in its three years on the circuit.

Organizers say they are approaching 70,000 tickets sold, with the two-day capacity of more than 80,000.