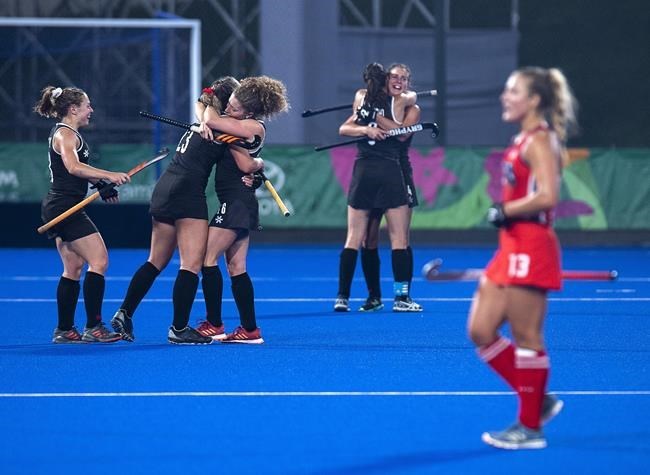 The Canadian men's and women's field hockey teams will have to get past Ireland to qualify for the 2020 Olympics in Tokyo.

The winners qualify for the 12-country field at next summer's Olympics in Tokyo.

The Olympic qualifying draw was made Monday at the International Hockey Federation (FIH) headquarters in Lausanne, Switzerland.

The Canadian women made the Olympic qualifier by virtue of their runner-up finish at the FIH Hockey Series Finals in June in Valencia, Spain. They have done it the hard way, raising money to pay for their training and trips after they lost their Own The Podium funding.

The men advanced by winning the FIH Series Finals in May with a 3-2 victory over host Malaysia.

Canada's women have sat out the last six Olympics, last competing in 1992 when they finished seventh in Barcelona in their third trip to the Games. The Canadian men, in their seventh Olympic appearance, finished 11th in 2016 at the Rio Games.

Other men's fall Olympic qualifying series see Spain vs. France in Valencia, the Netherlands vs. Pakistan in Amsterdam, India vs. Russia in Bhubaneswar, New Zealand vs. South Korea in Stratford, Germany vs. Austria in Moenchengladbach and Britain vs. Malaysia in London.

In other women's qualifying series, it's Australia vs. Russia in Perth, China vs. Belgium in Changzhou, Spain vs. South Korea in Valencia, India vs. the U.S. in Bhubaneswar, Germany vs. Italy in Moenchengladbach and Britain vs. Chile in London.

Host Japan, top-ranked Australia, No. 2 Belgium, No. 4 Argentina and No. 14 South Africa have already qualified for the Olympic men's field.

Japan, the top-ranked Netherlands, No. 3 Argentina, No. 6 New Zealand and No. 16 South Africa have made the women's draw.