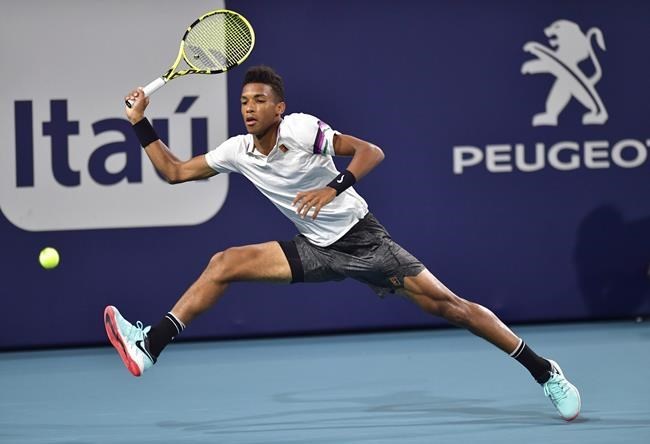 MIAMI — Canada's Felix Auger-Aliassime made history at the Miami Open on Wednesday night.

The Montreal teenager became the youngest semifinalist in the 34-year history of the event with a 7-6 (3), 6-2 win over 11th seeded Borna Coric of Croatia. The 18-year-old is the second qualifier to make the semis of the Miami Open, after Guillermo Canas of Argentina accomplished the feat in 2007.

"I think it just shows that I'm doing good things, I'm on the right track," said Auger-Aliassime. "I think I'm seeing the long term, and right now I'm just enjoying, you know, enjoying every day, enjoying every match, because you never know what's gonna happen next. I'm really enjoying myself."

He will face American John Isner, ranked ninth in the world, on Friday.

He might not be the only Canadian teenager in the men's semifinals.

"Everyone is super excited back home," said Auger-Aliassime. "It's great to hear all these good comments from them. It puts a lot of belief in tennis in Canada. I think all the Canadian players from the young kids to Denis and Bianca (Andreescu) and I, there is a lot of belief right now, so it's great to see."

Shapovalov and India's Rohan Bopanna lost in the men's doubles quarterfinal against American twins Bob and Mike Bryan, the No. 3 seeds, 6-3, 6-4 on Wednesday night.

The fifth-seeded women's doubles team of Ottawa's Gabriela Dabrowski and Yifan Xu of China lost to Victoria Elise Mertens of Belgium and Aryna Sabalenka of Belarus 6-2, 6-2 in their quarterfinal.