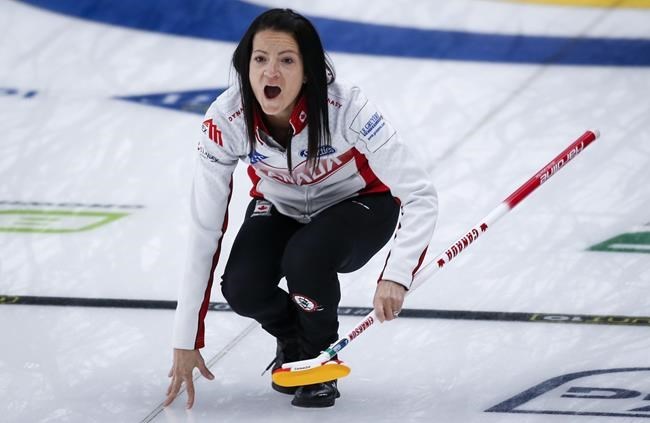 The host country halted a four-game losing skid with an 8-4 win Monday over South Korea.

At 2-5, Einarson was still dangerously close to finishing outside Friday's top six teams that will advance to the qualification round in Calgary.

Curling fans wanting to watch the Canadians attempt the feat on television or live streaming remained in limbo.

Positive tests for the COVID-19 virus increasing from four people to seven among the broadcast staff will keep games off the air into Wednesday.

The Canadians stole stole four points over the seventh to the ninth ends in a morale-boosting victory over Kim Eun-jung, whose team won Olympic silver in 2018.

"I really enjoy smiling, so now I've got something to smile about," Einarson said. "We really needed that win to just boost our confidence."

Canada was beaten 6-2 in the morning by a short-staffed German team of three players skipped by Daniela Jentsch.

An 8-5 record made the playoff cut in last month's men's world curling championship.

"It's still in our hands," Meilleur said. "All we can do is win out the rest of the games and see what happens."

The top six also qualify their countries to compete in women's curling at the 2022 Beijing Olympics.

If Canada finishes outside that group, a team would have to qualify the country at a WCF tournament in December following Canada's trials in Saskatoon in November.

Because of the uncertainty over the fall schedule, Curling Canada has yet to determine whether that team would be the trials winner or another foursome.

Einarson shed a few tears Sunday after a third straight loss. She then connected with family and friends virtually to boost her spirits.

"I did have a good cry. Just got to get it out some time," Einarson said.

The skip's tricky tap to lie three in the eighth end wrested momentum to Canada's side in the afternoon draw.

"I was actually shocked it was made because it was so hard, but it was a great shot and she threw it perfect," Meilleur said. "We really needed that at that time."

Game broadcasts were suspended Sunday and the morning draw postponed when four television personnel were affected by the coronavirus.

No games will be broadcast before Wednesday afternoon's draw, the World Curling Federation said.

"The broadcast staff remain in isolation in their hotel and are awaiting results from further testing, including testing for variants of concern," the WCF said in Monday's statement.

The television contingent isn't staying at the same hotel as the teams.

German second Klara-Hermine Fomm and alternate Emira Abbes continued to isolate in their hotel rooms because of positive tests for the virus before the tournament started.

So Jentsch says she and her two teammates felt zero pressure facing Canada.

"It's tough when you have the Maple Leaf on your back," Jentsch observed. "Everyone has big expectations and I think they're a great team.

"They are just not quite there yet, but for us it's easy to play against a team that's already broken a little bit. We have nothing to lose."

Italy and Estonia each had one win.

The 2021 LGT Women's World Curling Championship, originally scheduled for March in Switzerland, was moved to Calgary when Swiss health authorities refused to sanction the tournament.

The tournament is the seventh and final curling event held with no spectators at Markin MacPhail Centre.

The men's world championship had a coronavirus scare on its final weekend when four participants tested positive.

The event made it to the finish line, however, when it was determined those tests were "false positives."

The world mixed doubles championship in Aberdeen, Scotland, where Einarson and Brad Gushue will represent Canada, is May 17-23.

This report by The Canadian Press was first published May 3, 2021.