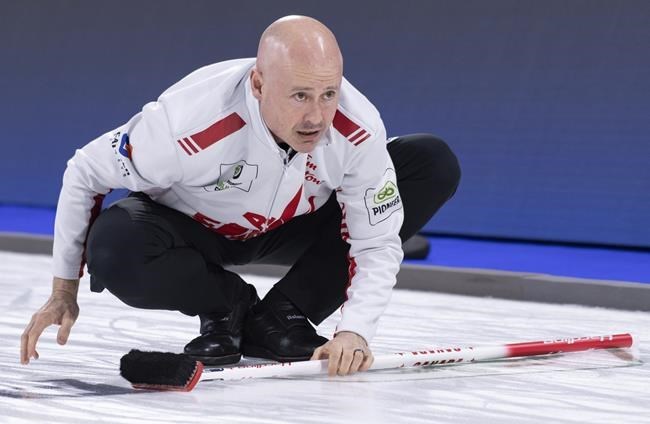 Skip Kevin Koe struggled with draw weight early in a 9-5 win over Italy's Joel Retornaz before displaying the form that has made his rink the top-ranked team in the world.

Koe found his rhythm over the last four ends and made two brilliant shots in the ninth that led to a steal of three and his third straight victory.

"There was no panic because we've been in that situation a thousand times," said Team Koe coach John Dunn. "We knew we were playing well, we were just a little bit off."

Canada extended its win streak to four games in the evening with an 8-6 victory over China's Qiang Zou.

The result moved Canada into sole possession of first place at 4-0. Japan, Sweden and Switzerland remained unbeaten at 3-0 while the United States and the Netherlands were 2-1.

Koe's final shot in the afternoon game was masterful.

His stone missed a guard by a whisker and took out two Italian stones to sit three under cover. Retornaz had no answer.

"When you've got a weapon like that, you're never afraid," Dunn said.

Retornaz started off strong but his team faded late. Throwing against three in the first end, he found a small port to catch a piece of the four-foot ring, giving up just one.

Retornaz made a delicate tap for two in the second and took a 3-1 lead when Koe's draw rolled off for a steal. Koe struggled with draw weight again in the fourth — this time he was light — as he settled for a single.

The two-time world champion skip was heavy with a draw in the fifth and Retornaz hit a runback to take a 4-2 lead into the mid-game break.

"I knew the rocks were good, I just had to find it," Koe said. "I made all of my draws in the second half."

Retornaz missed a draw for the first time in the sixth end and Koe made him pay. Italy's stone was a touch heavy and Koe used his final throw to tap it for a deuce.

In the seventh, Koe made a draw to set up a force and Retornaz delivered with a hit and roll for the lead. Canada responded with a deuce in the eighth.

Nerves may have been a factor for the Italians late in the game.

The team has played a limited schedule and is making its first appearance on North American arena ice this season. Italian second Sebastiano Arman flashed a stone in the eighth end and third Amos Mosaner threw 54 per cent on his draws.

"You never know if they're going to make a mistake, but there's a good chance they are," Dunn said. "Then when we capitalize on it, that's it."

In the nightcap, China led 3-1 after three but a poor fourth end proved costly. One stone picked and three jams over the end set up Koe for an open hit for four.

Canada added a deuce in the sixth end and ran China out of rocks in the ninth.

Canada will play single games on Monday (against Norway) and Tuesday (against Germany) before the much tougher second half of the schedule kicks in.