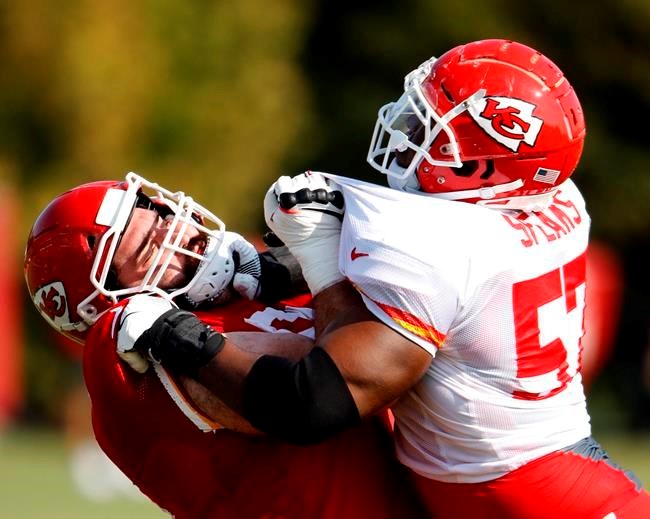 Ryan Hunter is thankful he's spending his off-season in Kansas City and not the upstart American Alliance of Football.

The AAF began its inaugural season earlier this month, it rosters full of players looking to earn another NFL opportunity. After spending his rookie campaign on the Kansas City Chiefs' practice roster, the AAF would've been a definite option for Hunter as practice-roster players immediately become free agents at season's end.

"That's definitely 100 per cent positive," Hunter said during a recent telephone interview. "Throughout the year they were very adamant about telling me I'd been doing a good job and to continue to progress and get better.

"The fact they wanted to re-sign me again, I think, relays that even more. I'm continuing to work this off-season to try and perfect my craft and become a better football player so when training camp rolls around there's no doubt I deserve to be on the 53-man roster."

The six-foot-five, 322-pound offensive lineman joined the Chiefs as an undrafted free agent out of Bowling Green. He was among their final cuts but returned on the practice roster and remained there for the entire '18 campaign.

Hunter said his first NFL season was one of adjustment. He practised with the Chiefs — earning no less than US$7,600 weekly — but didn't attend road games and watched home contests from the pressbox at Arrowhead Stadium.

"That (being on practice roster) was, I think, definitely the biggest adjustment for me," he said. "It kind of makes you feel like a redshirt freshman in college when you're doing what you can through the week but when the lights come on and it's time to play you're not there to help your team.

"That's very tough because I'm a very competitive person and that kind of takes away the competition aspect of it. Overall for the whole year it was treating Tuesday, Wednesday, Thursday and Friday practices like they're your game."

And making sure to keep learning along the way.

"I learned more this season than I did my entire football career to that point combined," he said. "Although you're not playing Sunday you're in meetings with the vets, you're at the practice and learning from coaches.

"Everything this year was a first so you're not used to anything. With a year under my belt, I'll already know the system, the offence, the coaches and playbook. Instead of having to worry about trying to figure out what play we're running or what I have to do on this play, I'll already have that engrained in my mind so I can just focus on the details of technique, becoming a better player overall and having a better football mind."

"You never really want to feel comfortable because that's when someone will snatch your spot and you'll be sitting on your couch instead of in a meeting room," he said. "Just comfort knowing I understand things and can anticipate what to expect at different points of the season . . . a lot less nervous energy coming out of the facility every day just because there'll be some familiarity."

It didn't take long for Hunter to realize life in the NFL was drastically different than in college.

"The playbook here is much more dense and coaches expect you to know more as pro athletes," Hunter said. "In college if you didn't know something your coach would say, 'That's OK,' but there might not be a next time here so mentally it puts more pressure on your to learn things quicker.

"Physically I thought I was ready for the season and early in training camp I felt pretty good. But camp is six weeks long and you're playing four (exhibition) games on top of that and there's no slowing down."

This off-season, Hunter has added mixed martial arts to his training regiment.

"It's to add extra cardio and hand-eye co-ordination to help propel me past some of the guys I'll be competing against for spots," he said.

Spending his first NFL season on the practice roster hasn't diminished Hunter's belief that he can play at this level.

"Getting cut last year was definitely a bummer and stung for a while," he said. "But our GM (Brett Veach), scouts and coaches made it clear I was one of the last cuts and it wasn't an easy decision and as long as I continue to progress and get better they can foresee me having a long, successful career in this league.

"You learn from your mistakes and your losses mean more than your victories so I try to use that as my motivation."

"The Americans better watch out," Hunter chuckled. "They might not want build that wall down south, they might have to do it up north.

"We're taking over the state and city."