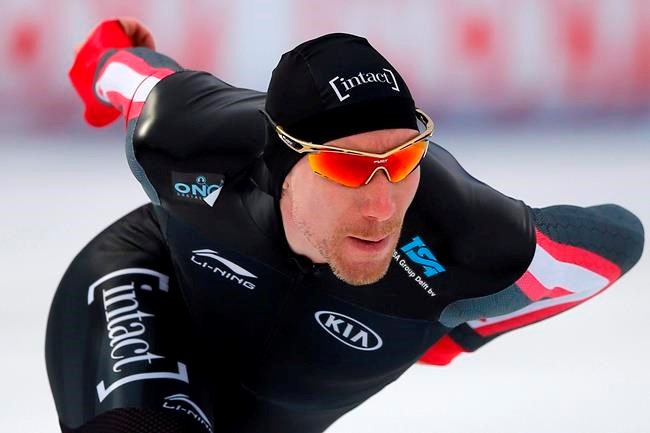 CALGARY — Canadian speedskater Ted-Jan Bloemen admits he has had trouble finding his stride this season after taking some time away from competition, then dealing with back injuries on his return to training. But the 2018 Olympic double-medallist believes he's rounding into form just in time for this week's ISU World Allround Speed Skating Championships.

Bloemen won gold in the 10,000-metre event at the 2018 Pyeongchang Games and added a silver in the 5,000 metres. After the Games he took some time off, spending two months backpacking in Asia with his wife.

But the time away form the sport and nagging injuries made his return a competitive standard to longer than he would have liked.

"It was difficult to find the rhythm again and it also came with back injuries I've been struggling with this season so that slowed down the process a bit," Bloemen said Wednesday at a press conference at Calgary's Olympic Oval to introduce Canada's team.

"After not training that much this summer I lost some strength and with the injuries, I lost some more strength so I'm building that back. Hopefully I can become a World Champion for the first time because I've never achieved that."

Bloemen's two medals were one of Canada's big stories at the Pyeongchang Games, though the Dutch-born skater felt his results could have been even better.

"Becoming an Olympic champion is the ultimate dream and I achieved that goal it was an amazing memory and I am super proud," Bloemen said. "If anything I think when I won my silver medal I could have done better and I should've won that race."

Speed Skating Canada chief executive office Susan Auch said she hopes the chance to compete for a world championship at home will mean more hardware for Bloemen and his teammates.

"It's always exciting to host these competitions at home in Canada. said Auch. "From my experience, competing at home it is a different kind of competition than some of the other competitions you compete internationally."