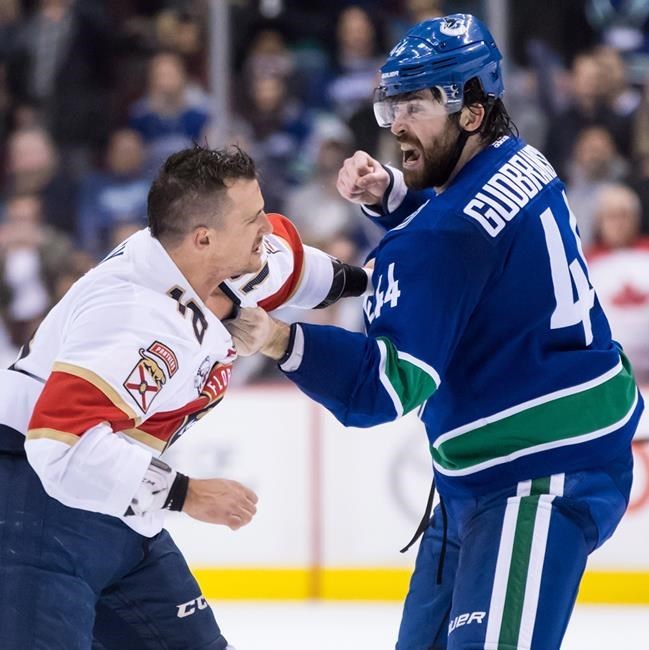 VANCOUVER — General manager Jim Benning says the Vancouver Canucks were looking to add a proven goal scorer when they made a last-minute deal with the Pittsburgh Penguins on Monday.

The team is now hoping Tanner Pearson can become a consistent top-6 forward.

"He's been a 40, 45-point guy in the league," Benning told reporters. "We think he's going to be a good fit with either (Elias Pettersson) or (Bo Horvat). He's just another guy that can score for us."

The 27-year-old Gudbranson has two goals and six assists in 57 games for Vancouver this season, but his plus-minus sits at a league-worst -27.

Drafted third overall by the Florida Panthers in 2010, the Ottawa native was traded to the Canucks in 2016 to bring a level of toughness to the team.

Benning acknowledged that Gudbranson didn't ever fully adjust to life in Vancouver.

"He had some injuries that kind of set him back. Maybe the style of game we played wasn't a fit to his game," the GM said. "But I've got to give him credit — he stuck up for our guys, he fought for our team, he was a good penalty killer for us."

Luke Schenn is expected to take over some of Gudbranson's protective role, Benning said.

Vancouver acquired the 29-year-old defenceman from the Ducks in January for Michael Del Zotto and a seventh-round pick. Anaheim sent Del Zotto to the St. Louis Blues on Monday for a sixth-round draft spot.

But Benning said he's excited about some of the club's defensive prospects, including Quinn Hughes, who went seventh overall at last year's draft. The 19-year-old is playing at the University of Michigan.

Vancouver acquired Dahlen from the Ottawa Senators for forward Alex Burrows in February 2017.

The 21-year-old has 14 goals and 15 assists for the American Hockey League's Utica Comets this season.

Benning said the young Swede's agent called him a few weeks ago, asking that Dahlen be moved. Some players are reluctant to pay their dues when it comes to development, he added.

Karlsson, 19, has four goals and 13 assists for Karlskrona HK in the Swedish league.

Vancouver also got calls about Edler leading up to the trade deadline, Benning said. The 32-year-old will be an unrestricted free agent on July 1.

The club approached Edler about the offers three or four days ago, but he declined to waive the no-trade clause in his contract, Benning said.

"If he would have wanted to waive his no-trade to go to one of those teams, we would have tried to figure out a deal for him. That, obviously, didn't happen," he said.

"Alex has been a great player for us for a long time," he said. "We'd like to continue for him to be part of our team, part of our group. And we're going to keep working towards trying to figure something out there."

A reluctance to give up draft picks limited what deals the Canucks could make leading up to this year's trade deadline, Benning said.

The draft is set to be held in Vancouver in June and the team doesn't want to trade away future potential for short-term fixes.