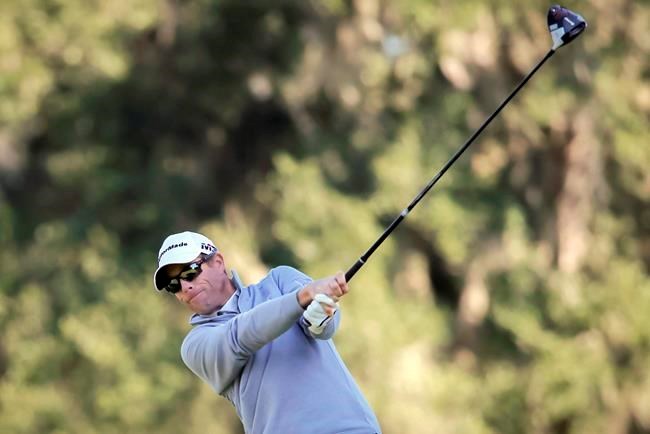 As David Hearn's up-and-down shot almost went straight into the hole on No. 18, he knew he was in an excellent position to return to the PGA Tour. But his mind, admittedly, was elsewhere.

The Canadian shot a 6-under 66 last week to finish in a tie for fourth at the Korn Ferry Championship and guarantee himself a 2020 PGA Tour card. However, with his wife and three children at home on Florida's east coast, Hearn was concerned about getting back to them before hurricane Dorian made landfall.

"It was distracting, there was no doubt. I think a lot of guys, as much as you want to focus on this big tournament that you're playing in, their head was somewhere else," said Hearn. "Mine was too, there's no doubt about it. Maybe that impacts the big picture of how you play that week."

Hearn finished 13 under — 10 strokes behind leader Tom Lewis — which was good enough to place within the top 25 after the three-tournament Korn Ferry Tour Finals. Being in the top 25 meant that the 40-year-old from Brantford, Ont., is back on the PGA Tour, starting on Thursday with A Military Tribute at The Greenbrier held at The Old White TPC in White Sulphur Springs, W. Va.

But after birdieing that 18th hole in the final round of the Korn Ferry finale on Sept. 2, Hearn's pressing concern was to get home. Because there were no flights available to Florida he had to drive from Newburgh, Ind., in one day, to help his family evacuate to Florida's Gulf Coast, out of Dorian's projected path.

"It was a challenging week to watch this massive storm develop and it had eyes right on where we live," said Hearn. "It was very distracting and I know that a lot of the guys on tour were thinking about it, were focused on it.

"It's fortunate that it went out to sea for a lot of the people in Florida but that's not to say the storm didn't wreak a lot of havoc and our hearts go out to everyone affected by it."

The Bahamas government said Wednesday there are 2,500 people on its list of those missing after hurricane Dorian. But the names have yet to be checked against the rosters of people evacuated from the devastated islands or staying in shelters.

More than a week after Dorian smashed thousands of homes on the country's Grand Bahama and Abaco islands, the death toll stood at 50 and was expected to rise, with search-and-rescue crews still making their way through the ruins.

"Our hearts go out to everyone in the Bahamas right now. They have a big challenge on their hands. So many lives have been lost and there's such a relief effort that needs to take place to help those people," said Hearn. "Every year when the hurricane season comes to Florida, you just hope to get lucky and all those storms go out to sea.

"Fortunately for us, we have the means to be able to move our family around and make sure everyone is safe and out of its path but that's not the case for everybody."

Hearn will be joined at the Old White TPC by fellow Canadians Michael Gligic of Burlington, Ont., Nick Taylor of Abbotsford, B.C., Roger Sloan of Merritt, B.C., and Mackenzie Hughes of Dundas, Ont. It will be Gligic's first tournament with a full PGA Tour card after he earned it on last year's Korn Ferry Tour.

MACKENZIE TOUR — Taylor Pendrith of Richmond Hill, Ont., trails only France's Paul Barjon for the top spot on the Mackenzie Tour's order of merit with one event left in the season. Barjon has earned $125,738 to Pendrith's $120,259 heading into the opening round of the Canada Life Open in London, Ont., on Thursday. The top player on the Mackenzie Tour gets a full card on the Korn Ferry Tour next season, a step away from the PGA Tour. Nos. 2-5 on the order of merit get conditional exemptions.

— With files from The Associated Press