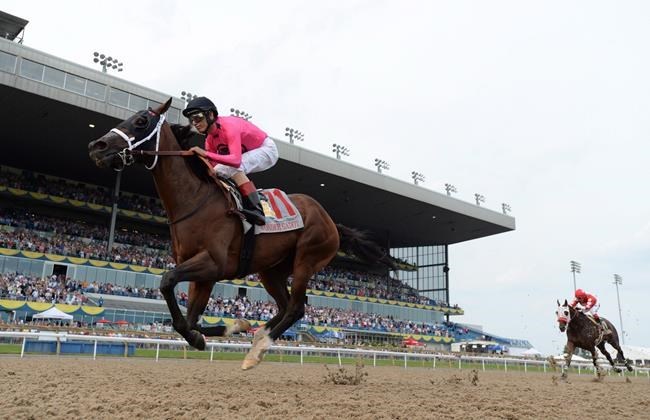 TORONTO — Steve Bahen and Desert Ride face a formidable challenge in returning Sam-Son Farm to the winner's circle at the $1-million Queen's Plate.

The Woodbine Oaks champion will be the lone filly in the 14-horse field Saturday at Woodbine Racetrack. And what's more, she'll break from the No. 1 post as an 8/1 pick.

But Bahen has defied long odds in this race before. In 2002, the Montreal native rode T J's Lucky Moon to victory in the opening leg of Canada's Triple Crown as a whopping 82/1 longshot.

And even in the Oaks on June 8, Bahen took the daughter of Candy Ride from last in the 10-horse field to victory also as an 8/1 pick. That was Bahen's third career Oaks win.

"That's kind of her a bit," trainer Neil Howard said. "That's been her running style.

"She likes to get her feet under her a bit. I was so happy to have that 1 1/8 miles for her. I didn't think she was going to get there but going past the 3/16ths pole you had that relieved feeling that she was running well and going to finish well. As tough as these races are — you always want to win — as long as they run well and come back good you have to be satisfied with that. Winning is a bonus"

"She is a charm . . . she just does not concern herself with anything. She has a wonderful mind. Good horses, most of the time, they have that good demeanour. And she certainly does. It just makes everything much better."

Sam-Son Farm horses have won five Queen's Plates but none since 2009 when Eurico Rosa da Silva rode Eye of the Leopard to victory at Woodbine Racetrack.

Sam-Son Farm was founded in the 1970s by industrialist Ernie Samuel and won the first of its 10 Sovereign Awards as Canada's top owner in 1980. Sam-Son has also been named the country's outstanding breeder on seven occasions.

Samuel's first Queen's Plate winner came in 1988 with Regal Intention. Others followed with heralded filly Dance Smartly (1991), Scatter The Gold (2000) and filly Dancethruthedawn (2001), that one coming a year after Samuel passed away.

Despite her post and odds, Desert Ride will have history on her side Saturday. Nine fillies have won the Queen's Plate since its first running at Woodbine in 1956, including Wonder Gadot last year and Holy Helena (owned by Stronach Stables) in 2017.

Casse said a big reason for the fillies success has been the conscious effort by Woodbine officials to schedule the Woodbine Oaks — the opening leg of the Canadian Triple Tiara, the Triple Crown for fillies — three weeks ahead of the Queen's Plate to give the fillies sufficient recovery time to be at their best for the Plate.

"In the U.S. most of the time the equal races — when I say equal races I mean the Kentucky Oaks (fillies event) and the Kentucky Derby — run so close to each other you can't run the fillies against the colts," Casse said. "When (Woodbine) did that (scheduled Oaks three weeks ahead of Plate) now you start to see more fillies running in the Queen's Plate.

"It happens all the time in Europe where fillies will run and beat the colts so I think there's too much put on that. The fillies are as good as the colts for the most part, they just don't get the opportunity and it's only because of what's given to them."