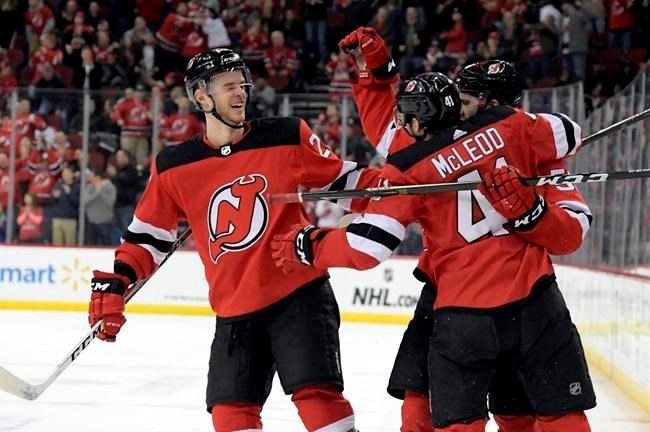 NEWARK, N.J. — New Jersey Mirco Mueller had full range of motion and was conscious after being taken off the ice on a stretcher following a nasty, head-first fall into the end boards during the Devils' game with Calgary on Wednesday night.

Devils coach John Hynes said after the game Mueller sat up in the locker room and knew what was going on before going to a hospital for evaluation.

"Thank God, he's OK," Hynes said after the Devils' 2-1 loss. "He's fully conscious and all of his extremities are moving fine."

Mueller went head-first into the boards at an awkward angle after going to the Flames' net on a rush. Calgary forward Michael Frolik then fell on top of him.

Teammates immediately called for medical personnel to come out to the ice. Play was delayed about 10 minutes while the 23-year-old Swiss player was attended to by medical personnel and trainers from both teams.

"You see guys get helped off the ice all the time, but never like that and that was new for me to see and I didn't really like that," Devils goaltender Mackenzie Blackwood said. "You try to refocus, but in the back of your mind you hope your teammate is OK."

Frolik said he feared the worst, until he said Mueller give a thumbs up as he was wheeled off the ice.

"When it happened I thought: 'Of My God, this is going to be really bad,'" Frolik said. "I fell right on him and I saw his head go first. It's tough, but when he put the finger up, it's usually a good sign."

The fall happened near Flames goaltender David Rittich and it scared him.

"I don't even want to talk about it because when I saw his eyes, his mouth was open and blood went out," he said. "It wasn't a great feeling. Hopefully, he will be better and good in a short time. I don't want to imagine any more."

"You can even see it on their faces, for Calgary, that they really cared," Coleman said. "No one wants to see a player go down like that. I've never been a part of a game when something like that happened."

Mueller has one goal and nine assists in 47 games this season.