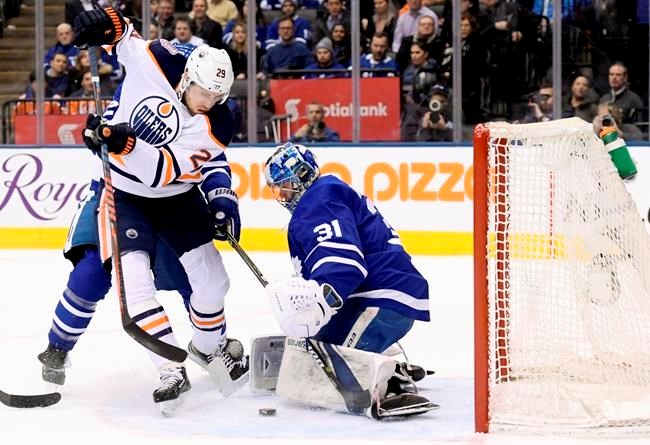 TORONTO — Leon Draisaitl's in the midst of a career season, but he would give it up if it meant his Edmonton Oilers were playoff bound.

Draisaitl's power-play goal gave the Oilers an early lead before Edmonton was overwhelmed in a 6-2 loss to the Toronto Maple Leafs on Wednesday night. That extended Draisaitl's point streak to eight games and brought his goal total up to 39, already 10 better than his previous scoring high in 2016-17, but the Oilers slipped further back in the Pacific Division.

"I'd rather give up some of my goals to be in a playoff spot," said a downcast Draisaitl in the visitor's locker room after the game. "I'm confident right now, obviously, they've been going in, but it's not about me. This is a team sport and I want to win hockey games and I want to make the playoffs.

"Like I said, I'd rather give some of my goals rather than having them and not making the playoffs."

Draisaitl's goal — with assists from Darnell Nurse and Connor McDavid — gave Edmonton a lead for just under seven minutes in the first period. Patrick Marleau tied it for Toronto five seconds after an Oilers penalty expired and with two minutes left to go in the first period. Then the wheels came off for Edmonton in the second period as the Maple Leafs reeled off four goals in a seven-minute span and never looked back.

Andreas Johnsson's second goal of the night made it 5-1 for Toronto and chased Oilers starter Mikko Koskinen from net in favour of Anthony Stolarz. As Stolarz skated from the bench a fan threw an Edmonton hat on to the ice.

The fan wasn't the only frustrated person at Scotiabank Arena.

"It was disappointing to play that well in the first period and come out 1-1," said Hitchcock. "It's really on us. We couldn't take that penalty at that time, we did, they got it right at the end of the period.

"I think after they scored their third goal we were in a little bit of shock and seemed like every puck was going in our net and every mistake we were paying for."

The Maple Leafs continued to pile on until Ryan Nugent-Hopkins added a goal for Edmonton late in the third period with Nurse adding an assist.

It was McDavid's first game back after a two-game suspension for a hit to the head on Islanders defenceman Nick Leddy last week. Hitchcock said before the game that McDavid would be "pissed off" and his teammates expected that the product of nearby Richmond Hill, Ont., would be fired up to perform well in front of friends and family.

But aside from the assist on Draisaitl's goal, McDavid was largely invisible in his 21:52 of play time, earning a minus-2 defensive rating. He was also not available in the Oilers locker room after the game.

"We came with the right attitude and the right game in the first period and then we allowed one or two goals in the second period to deflate us," said forward Milan Lucic. "It's unfortunate when you're playing on the big stage, game's on coast to coast, everyone's watching and you don't want to come out feeling like this and losing 6-2. It's disheartening."