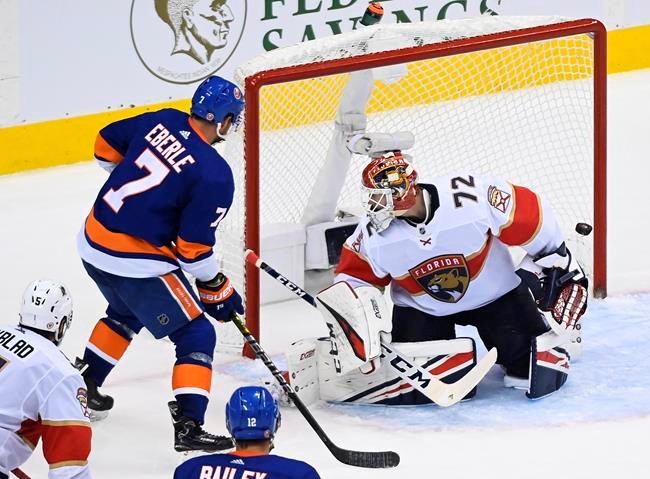 TORONTO — Jordan Eberle scored twice, including the go-ahead goal, and the New York Islanders rallied to a 4-2 win over the Florida Panthers and take a 2-0 lead in their best-of-five NHL preliminary round playoff series on Tuesday.

“Even when we didn't score, we were able to get some momentum and try to take some control over,” said Pulock, who tied the game at 2 with Florida's Mike Hoffman serving a holding penalty.

Hoffman had a goal and assist and captain Aleksander Barkov also scored for Florida, which is one loss from going one-and-done in the playoffs for a fifth consecutive time.

“We’ve got to play with some composure in those pivotal moments,” said Panthers first-year coach and three-time Stanley Cup champion Joel Quenneville.

The Panthers have advanced past the playoffs’ opening round just once in franchise history, in 1996, when Florida reached the Stanley Cup Final before being swept by Colorado.

Florida is making its first playoff appearance since 2016, when the Panthers were eliminated by the Islanders in six games.

Florida finished 10th in the East and qualified for the playoffs, which were expanded to include 12 teams from each conference after the coronavirus pandemic cut short the regular season in mid-March.

Sergei Bobrovsky stopped 30 shots, and had little chance on Eberle’s go-ahead goal with 3:33 left in the second period.

Set up in the left circle, Eberle patiently waited for Brady Keeper to go down and attempt to block the shot. Eberle took a step into the middle to avoid Keeper, and caught Bobrovsky leaning before snapping a shot into the open left side.

“When you have a goalie like Bob, he gets over pretty quick, so you've either got to get it off quick or you've got to be patient,” Eberle said. “So I was lucky enough to bide my time, get around the D-man and throw it in.”

Pulock tied the game at 2 just under three minutes earlier, when he blasted a shot from the top of the left circle, which somehow sneaked in under Bobrovsky’s left pad.

The Islanders avoided a major scare 8 1/2 minutes into the third period, when leading scorer Mathew Barzal crashed heavily and awkwardly into the end boards after getting a shot off and being shoved from behind by Florida’s Frank Vatrano. Barzal got up slowly, and after being attended to by a trainer, but returned for the next shift.

Eberle sealed the victory with New York’s second power-play goal of the game with 9:31 left, when Anthony Beauvillier’s shot from the left circle banked in off Eberle’s shin.

The teams face a short turnaround with Game 3 on Wednesday.

“Tomorrow's a new chance,” Barkov said. “We've got to go into that game and play our best game of the series and play smarter than the past two games.”

The Islanders, who beat Florida 2-1 in the opener Saturday, have won six straight meetings — including the regular season — against the Panthers going back to a 4-2 loss on Nov. 10, 2018.

The Panthers struck first 11:16 in, and just as Beauvillier stepped out of the penalty box after serving a slashing penalty.

Jonathan Huberdeau held the puck in the left corner, and slipped a pass to the high slot to Hoffman, from where he snapped a low shot that sneaked in through a crowd and past Varlamov’s legs.

Martin tied the game at 1 at the 6:12 mark of the second period, before the Panthers responded with Barkov’s power-play goal 1:42 later.

NOTES: Panthers D Mike Matheson was fined $2,500 for high-sticking Brock Nelson in the first period, the NHL's department of player safety announced. Matheson, who was issued a double-minor penalty, was battling for position in front of the Panthers net before he swung around and struck Nelson in the helmet with the blade of his stick. ... Islanders D Johnny Boychuk did not play after being shouldered to the head by Matheson in Game 1. He was replaced by Andy Greene. ... The Panthers made two changes from Game 1, with C Aleksi Saarela in for C Dominic Toninato, and D Brady Keeper in for D Riley Stillman. ... The teams’ first four meetings in 2019-20 took place in four different arenas, including Toronto’s Scotiabank Arena, the NHL’s Eastern Conference playoff hub. The teams also met in Florida’s BB&T Arena, and the Isles’ two homes, Nassau Coliseum and Barclays Center.

Game 3 is Wednesday at noon EDT.