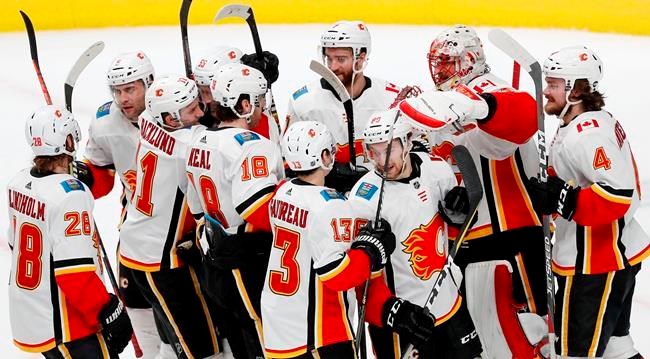 It didn't have to be.

With a first divisional championship in 13 years within their grasp, they left nothing to chance.

The Flames scored three times in less than two minutes late in the first period on their way to clinching the top spots in the Western Conference and the Pacific Division with a 5-3 victory over the San Jose Sharks on Sunday night.

"Nothing was said," Flames goalie Mike Smith acknowledged when asked about the mood in the locker before the game. "It was pretty quiet as far as talking about that. There was a feeling that everyone knew what was at stake here, and I think we did a good job of looking after what we needed to look after.

Sean Monahan, Mark Jankowski, Dalton Prout, Mikael Backlund and Michael Frolik all scored for Calgary, which won for the eighth time in 11 games. The Flames will have home-ice advantage throughout the Western Conference playoffs.

It's the first time the Flames have won their division since capturing the Northwest title in 2006.

"It's huge," said Monahan, in his fifth season with Calgary. "I've been here a long time now and it's tough enough to make it to the playoffs, so I think to do what we did is pretty special and it's something I'll always remember.

Timo Meier and Logan Couture each had a goal and an assist and Kevin Labanc also scored for the Sharks, who lost for the eighth time in nine games after winning six straight.

The Flames held San Jose to a season-low 15 shots. The Sharks' previous low was 20 against Boston on Feb. 26. San Jose managed just nine shots through the first two periods, and just three in the second.

The Sharks were coming off an emotional 4-3 overtime victory over Vegas on Saturday in which they clinched second in the Pacific. They looked fatigued Sunday.

"We didn't come out the right way," Meier said. "We didn't play the full 60 minutes. I know it's back-to-back, but we need to be better in those situations, playing high-intensity games."

San Jose will play Vegas in the first round.

"I haven't thought about it yet," Couture said. "We have three games left to figure things out. They're a good team. It's going to be a challenge. We haven't been playing well. It seems like we're stuck in mud the last three weeks."

Janikowski scored his 34th goal just 31 seconds later, and Prout scored his first of the season at with 3:47 left in the period to put the Flames up 3-1.

Backlund scored his 21st goal in the second period, and Frolik his 16th in the third to cap the scoring for Calgary.