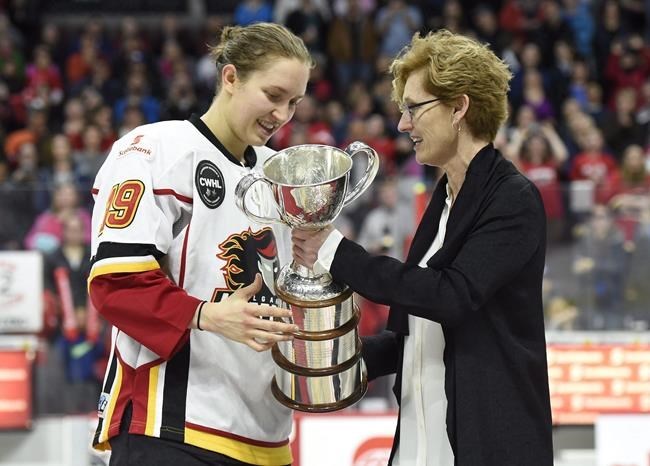 The Clarkson Cup will continue to reward women's hockey champions in Canada regardless of a league's uncertain future, says former governor-general Adrienne Clarkson.

Clarkson, the country's governor general from 1999 to 2005, commissioned and donated the trophy meant to be the female equivalent of the NHL's Stanley Cup.

The Clarkson Cup was hoisted into the air by the victorious team in the Canadian Women's Hockey League, which has abruptly announced it will fold after 12 years.

"The Clarkson Cup will always be there to be the symbol and the trophy for the best women's hockey," Clarkson told The Canadian Press on Monday.

"I have utmost respect for people like Jayna, who is a four-time Olympian herself, that they care about the game and they care about it being played properly and well and that's what we hang our hopes on really," the former governor general said.

A week after Clarkson handed her namesake trophy to the victorious Calgary Inferno, the CWHL announced it will cease operations May 1 because "the business model has proven to be economically unstable."

"I understand certainly that the not-for-profit model just didn't work," Clarkson said. "I've known that for 10 years quite frankly.

"I've always wondered how these great women studying to be doctors and some already lawyers and teachers were playing for these pitiful amounts of money, when in fact sports is very professional and is a business."

Walzak told The Canadian Press on Sunday the league needed more revenue, while Hefford said the league was finished even if a financial saviour rode to the rescue.

The CWHL's overseer its first 11 years says she does not know what transpired in the year since she stepped down that led to the league's sudden demise.

Revenue from the addition of two Chinese teams helped the CWHL start paying its players an annual salary between $2,000 and $10,000.

The two Chinese teams amalgamated into one for 2018-19.

The league survived the 2015 arrival of the U.S.-based NWHL, which threatened to poach star players with the prospect of higher salaries.

Andress didn't want to comment on whether the league's business model was sustainable or not.

The CWHL's roughly 200 players, coaches and general managers and team personnel had no inkling their league was about to fold, but Clarkson said she did.

"About two weeks ago, Jayna and Laurel came to see me and fill me in what was happening," she said. "They prepared the ground for me. They said 'the not-for-profit model was not working.'

"It sounded worse than it's ever sounded."

Players stepped up their calls over the last year for one women's professional league in North America.

Hefford, a former CWHL star, agreed that was a priority when she took over for Andress last year.

The CWHL's disappearance creates a hockey void in Canada to be filled either by a replacement league or by the NWHL's expansion into Canada.

The NHL has been supportive of women's hockey on multiple fronts, but seemed reluctant to flex its power as a possible league owner with two leagues operating.

The for-profit, five-team NWHL referenced NHL commissioner Gary Bettman and deputy commissioner Bill Daly in a statement saying "we invite all leaders to join us in building a powerful women's league for the U.S. and Canada."

Whatever the future of a women's hockey league in Canada, the CWHL played a crucial role, Andress said.

From the record 175,000 who tuned in to watch the Clarkson Cup final March 24, to the first all-star game in an NHL arena, to the first transgender player going public with her identity, Andress says the CWHL made its mark on hockey, society and people's lives.

"The CWHL has made a difference," she said. "You can't erase those 12 years because the impact has been phenomenal on the young kids.

The stars of the women's hockey are in Espoo, Finland, preparing for the world championship starting Thursday.

Canada's roster is the most impacted by the loss of the CWHL as 18 of the 23 in Espoo played in the league.

In the wake of Sunday's announcement, several Canadian players posted the same statement on their social media accounts:

"The only thing stronger than the initial shock of the news, was the force felt by every single one of the players coming together. We know what we have is not enough. We want to build a better future for ourselves and for generations of women to come. That begins now."