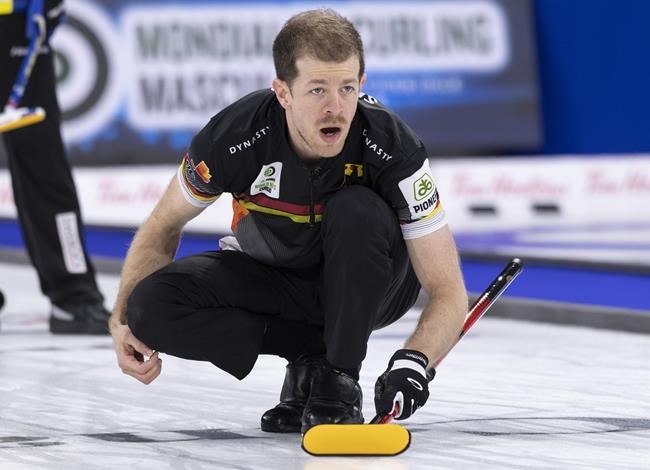 LETHBRIDGE, Alta. — Former Canadian junior champion Ryan Sherrard was about six years removed from the sport when he took in the 2016 world men's playdowns as a fan.

Little did he know his trip from Munich to Basel, Switzerland that year would lead to a rekindled passion for curling and an eventual spot on the German men's team.

It's a journey that has brought him back to Canada for this week's world championship at the Enmax Centre.

"As a Canadian curler to get to play in the world championship is unreal," said Sherrard, who throws second stones for Germany. "I've yet to play in a Brier, which is still on my bucket list. But it's a dream to play in Canada."

Sherrard, a 32-year-old native of Saint John, N.B., was in high school when he won junior nationals in 2004. He went on to study biochemistry at Mount Allison University before taking a semester off for a backpacking trip to Europe in 2008.

He returned to Germany the next year and this time decided to stay.

"I ended up doing my master's there and then also my PhD," he said. "So I never really had a long-term plan. Doors just kind of opened and I took them as they opened."

Midway through his PhD work at the University of Munich, Sherrard thought it would be fun to check out the 2016 world championship.

He stayed with friends in Basel who happened to know players on the German team.

"They introduced me and we had a BBQ together," he said. "They sneaked me into the arena so I could watch the final. I went back to Munich thinking nothing of it, that I just had a good weekend."

A few months later, Sherrard got a call from the German national coach. He wondered if Sherrard was interested in filling in for the team's injured lead.

Sherrard agreed and made plans to take a train to Fussen to throw practice stones for the first time since about 2010.

"None of the technique or anything really goes away," he said. "It gets a little bit rusty but after a few practice sessions and a couple of months I was right back into it."

Six weeks later he made his competitive return in Sapporo, Japan, and a few World Curling Tour events followed that season. Sherrard made his world men's championship debut in 2017 at Edmonton and returned to the event last year in Las Vegas.

The German lineups have changed regularly over the last few years. Sherrard's current team has played together since November.

Skip Marc Muskatewitz was a second in 2016 and is back throwing fourth stones. Third Daniel Neuner and lead Dominik Greindl are playing this event for the first time.

They dropped an 8-2 decision to defending champion Niklas Edin of Sweden on Monday morning, then lost 9-6 to Switzerland in the evening to fall to 1-4.

Edin (5-0) remained unbeaten along with Canada's Kevin Koe (5-0), who needed only six ends to beat Norway's Magnus Ramsfjell 10-2. Japan's Yuta Matsumura was to 4-1 after an 8-3 loss to Sweden in the night draw. Japan began the day with an 8-7 extra-end win over Jaap Van Dorp of the Netherlands.

Switzerland's Peter De Cruz beat Van Dorp in the afternoon before winning against Germany to sit at 5-0 after eight draws of round-robin play, which continues through Friday. American John Shuster was at 4-1 after a 10-3 win over Russia and a 9-8 win over Scotland's Bruce Mouat.

The six-team playoffs begin Saturday and the medal games are set for Sunday.

Sherrard, who also serves as vice-skip, finally finished his studies a year ago when he defended his PhD in cell biology.

"If you want to fall asleep, I can go into details," he said with a laugh.

He landed a position at a Munich-based biotech company, where he studies gene activity and is working on developing technology for early diagnosis of diseases.

"Everyone has got a different background," he said. "I also look at these other (curlers) that have cool jobs and own a car and a house and have a family. I'm living in a loft apartment in Munich with a rusty bike. I was a student for most of my life.

"Science and curling were my two passions and I just went all out for both of them."

He took the week off school when the world championships came to Saint John the next year.

"I soaked up the entire event and I got autographs from all the teams," Sherrard said. "That did it for me. I was hooked.

"Now 20 years later, to be curling and competing at the worlds, I can't explain how surreal it is."