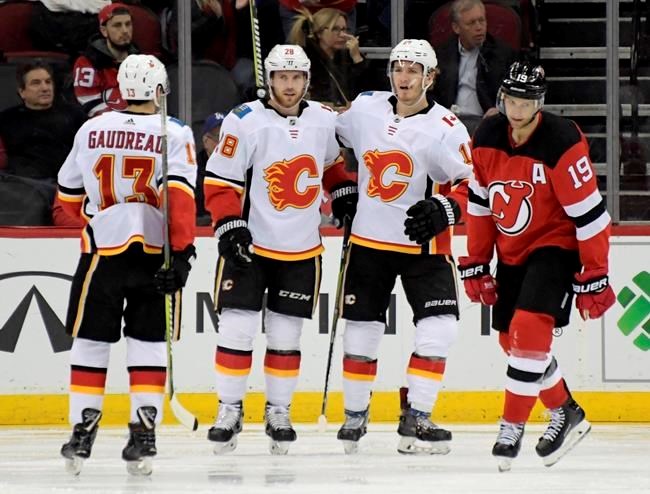 NEWARK, N.J. — The Western Conference-leading Calgary Flames are rolling after finishing off the Eastern portion of their NHL schedule.

Johnny Gaudreau set up two second-period goals and the Flames extended their season-high winning streak to seven games with a 2-1 victory over the New Jersey Devils on Wednesday night.

"I think we've come a long way in that sense and play well defensively," Flames captain Mark Giordano said of winning on a night when the team struggled playing the second of a back-to-back. "We have the goaltending, we have the depth if we can get our minds in the right place. I think we're a really good hockey team and we can do some damage."

Elias Lindholm also scored for the Flames, who have points in eight straight games. David Rittich made 19 saves in improving to 22-5-5.

Kevin Rooney scored a short-handed goal for the Devils. Mackenzie Blackwood, who spent the last three weeks in the minor leagues, was outstanding in making 33 saves in his return to the NHL.

The game was delayed about 10 minutes early in the third period after Devils Mirco Mueller crashed into the end boards on a rush and had to be taken on the ice on a stretcher. He moved his legs and gave a thumbs-up to fans.

"He's got full range of motion and he's conscious and he's just at the hospital now getting evaluated now, but thank God he's OK," Devils coach John Hynes said. "He's fully conscious and all of his extremities are moving fine. ... Mentally, he was fine and he sat up before he left the arena for the hospital, and (had) full awareness of what was going on."

After outshooting the Devils 15-5 in a scoreless first period, Calgary took the lead at 1:07 of the second period on Lindholm's 26th goal of the season. His intended pass from the left circle with the Devils playing two men down hit off the skate of Sami Vatanen and caromed past Blackwood.

"A lucky one," Lindholm said. "I was trying to go backdoor and hit the skate and it went in. It wasn't pretty, but it went in and that's all that matters."

The goal came a second after the first penalty expired and ended the power play.

Gaudreau and Giordano combined on a great goal at 13:52. Gaudreau carried the puck into the Devils' zone on a counterattack and made a nifty cross ice pass to the 35-year-old . He lifted his skate as if he was going to snap a shot. That froze Blackwood and he continued toward the net and slid a backhander into an open net for his 14th goal.

Giordano laughed when asked if he was making a Mark Messier-type fake.

"Honestly, I was thinking shot the whole way and he took everything away, so desperation at the end, you go by instincts and took it to my backhand and it worked out for sure," he said.

The point was Giordano's 60th of the season, making the Flames captain the fourth in NHL history 35 or older to score 60 points in a season. Nicklas Lidstrom, Al MacInnis and Sergei Zubov are the others.

Rooney got the Devils back in the game with 3:13 left in the second period. He stole the puck from Gaudreau in the Calgary end and circle before releasing a shot from the left circle that beat Rittich.

"I saw him coming around the net there and wanted to get up ice and didn't want to give him time and space with the puck," Rooney said. "Just had a good angle on him and was lucky enough to strip him and put it in."

Rittich protected the lead in the third, stopping Travis Zajac in close and Will Butcher from the point on power play.

"We didn't give up huge shots, but they had a couple of good looks, a couple of two on ones," Rittich said. "We did a great job in our zone. That's important if you want to make the playoffs."

NOTES: Flames and Devils will play in Calgary on March 12. ... After missing 14 games, the Devils activated Vatanen (concussion) from injured reserve. ... The Flames have killed off 13 straight power plays over the last five games. ... Devils leading goal scorer Kyle Palmieri (26 goals) was out with a lower-body injury. Calgary is 9-2 against New Jersey in their last 11 games.