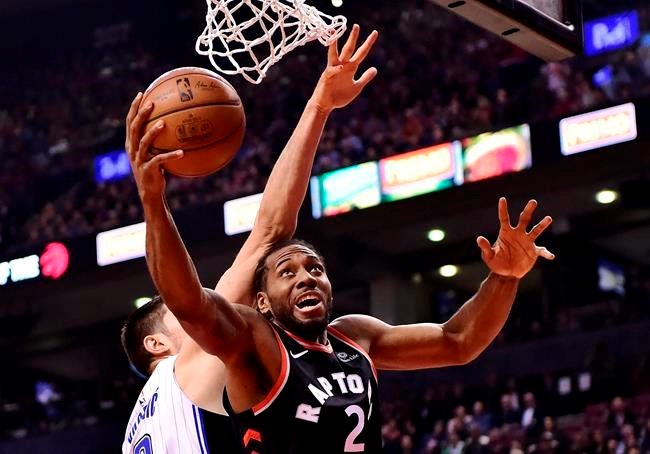 TORONTO — Moments after Danny Green had one of the best offensive performances of his career, the Toronto Raptors guard beat a hasty exit to a nearby medical facility for tests on his injured thumb.

Green jammed his left thumb in the first quarter of a 121-109 victory over Orlando that clinched Toronto the Atlantic Division title for the fifth time in six seasons. He went on to have seven three-pointers and a season-high 29 points.

"He got it taped up a little bit at halftime," coach Nick Nurse said.

It apparently didn't affect his shooting.

"It did not," Nurse deadpanned.

Green's seven threes were one shy of his career high of the eight he had in a 24-point performance in a January 19 win over Memphis. His X-rays were negative. He was undergoing an MRI on Monday night.

Kawhi Leonard and Serge Ibaka had 15 points apiece, Marc Gasol chipped in with 13, Kyle Lowry had 12 and Fred VanVleet finished with 10 for the Raptors (55-23), who stretched their win streak to four in a row.

Evan Fournier topped the Magic (38-40) with 21 points, while Montreal native Khem Birch had 11.

The Raptors, who'd lost twice to the Magic earlier in the season, got off to a slow start, but found another gear in the second quarter, turning an 11-point second-quarter deficit into a 10-point lead by halftime seemingly with ease.

"They were just shooting a high percentage in that first quarter. It then turned the other way and they started missing shots," said Leonard. "It's good for us with five games left (in the regular-season). There's good value in playing a competitive team in the end who is fighting for playoff position. . . that can only help us."

Green had three threes and 11 points in the third quarter, and when VanVleet drilled a three-pointer with 2:17 left in the frame, the long bomb put Toronto up by 24 points. They cruised into the fourth with a 95-75 lead.

None of the starters saw the floor in the fourth quarter. Orlando made a run in the dying minutes after Nurse had emptied his bench, pulling to within eight points with two minutes to play. But that's as close as the Magic would come.

The Magic began the night one spot out of a playoff spot in the East, a half game back of eighth-place Miami. Monday's game was the first of four games for Toronto against teams playing for their post-season lives. The Raptors visit Brooklyn on Wednesday, Charlotte on Friday, then return home to host the Heat on Sunday, the Raptors' final regular-season game at home.

Nurse was happy to have some competition after blowout wins in Toronto's last three games (two versus Chicago, and one vs. the New York Knicks).

"I'm glad this team's in town because they're gonna play their butts off," Nurse said before tip-off. "I'm not so sure we've had a team play their backsides off here in a few games. It's been just a little bit too easy, right?

"Not taking away anything from anybody. But we've been pretty comfortable here, and I wouldn't mind maybe a little bit more stress. I don't know why."

Orlando could end up being Toronto's first-round opponent in the playoffs. More added value to Monday's win.

"There's value in anything that we do together," Gasol said. "There's a lot of value, and things that we can learn, especially with me being here (Gasol arrived in a February trade). Any exposure out there, positive or negative, any challenges that we face out there as a team, I see it as a positive, obviously."

The Magic controlled the first quarter, racing out to nine-point lead on a Fournier dunk midway through the frame. Orlando led 36-29 to start the second.

A Fournier jumper stretched the Magic's advantage to 11 points, but the Raptors outscored the visitors 31-10 to end the half, taking a 62-52 lead into the halftime break.

Toronto shot 19-for-37 from three-point range. The Raptors' season high is 21 threes.

Note to readers: This is a corrected story. A previous version had an incorrect score.