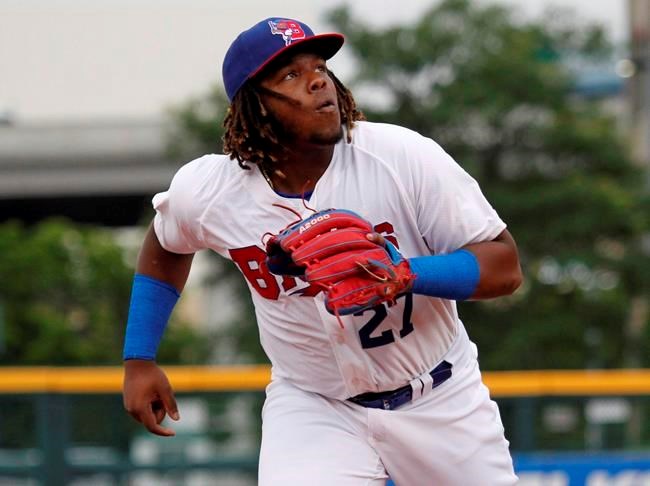 TORONTO — There's one rookie slugger everyone wants to see at Blue Jays spring training this year, even though no one expects him to crack the opening day lineup.

Still, it won't be long before Vladimir Guerrero Jr. and his booming bat become lineup fixtures for the rebuilding Blue Jays.

Guerrero Jr. was born in Montreal, where his Hall of Fame father starred for the Expos.More than two decades after his dad flashed All-Star form north of the border, the son is set to take a different Canadian city by storm.

Signed by Toronto in 2015, Guerrero Jr. turns 20 on March 16. Beefy and broad-shouldered, his stance and explosive swing are almost identical to those of his prodigious dad. Guerrero Jr. has battered baseballs at every level of the minors, flirting with .400 at Double-A last season before a knee injury in June. He returned and rose to Triple-A in July, posting a.381 average with 20 homers and 77 RBI in 91 games between the two levels.

A third baseman whose defensive skills lag behind his bat, Guerrero's big league arrival will likely wait a few weeks while the Blue Jaysdelay starting his service time long enough to guarantee a seventh season of club control before free agency.

For now, Guerrero Jr. will only join his future teammates in spring exhibitions, giving everyone a glimpse of what's to come.

With Martin gone, Toronto will make one of two rookies its primary catcher. Both Danny Jansen and Reese McGuire are 23 years old as camp opens. Each debuted last season, with Jansen arriving one month after playing in the All Star Futures game, and McGuire getting a brief cameo in September. Whoever doesn't win the starting job will likely go to Triple-A Buffalo. Veteran Luke Maile is Toronto's projected backup.

Middle infield. Besides dumping Tulo, the Blue Jays lost two versatile infielders this , trading Aledmys Diaz to Houston and parting ways with Yangervis Solarte. Even so, they're still well-stocked with infielders, having added the sure-handed Galvis to a group including prospect Lourdes Gurriel Jr., Devon Travis, Richard Urena, and Brandon Drury. Roles for these players remain unclear as camp begins, but the Blue Jays don't lack options.

Starting pitching.Right-handers Aaron Sanchez and Marcus Stroman give Toronto two potential horses at the top of the rotation, but both are coming off unproductive, injury-marred seasons. Hopes are high for left-hander Ryan Borucki, who posted an impressive 3.87 ERA in 17 starts as a rookie, but there will likely be sophomore bumps. While Shoemaker and Richard provide veteran depth, the starting staff doesn't inspire confidence.

The Blue Jays will keep shopping for rotation and bullpen help throughout spring training, looking to add players on major and minor league deals. There's also the possibility Toronto trades from its position player surplus, or deals a veteran such as Stroman, in exchange for young arms. Toronto begins the regular season at home to Detroit on March 28.