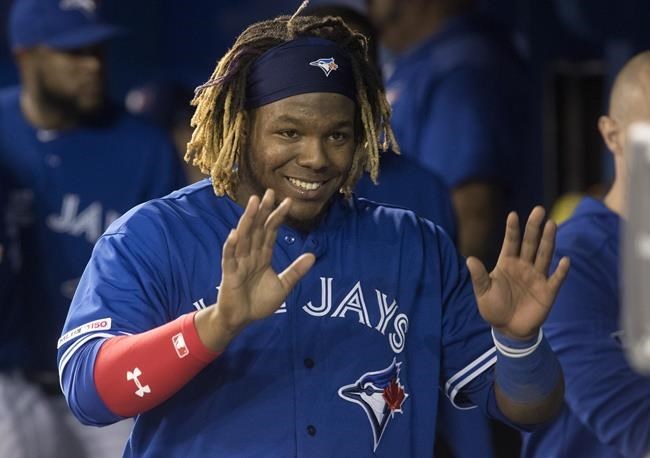 TORONTO — Vladimir Guerrero Jr.'s first weekend in Major League Baseball included thousands of fans serenading him in his Rogers Centre debut, a meeting with Drake at a Toronto Raptors playoff game and a pair of clutch ninth-inning hits.

But what will stick with the 20-year-old rookie phenom is how his Toronto Blue Jays played against the visiting Oakland Athletics.

"Best moment is that we won all three games," said Guerrero through a translator on Sunday after the Blue Jays completed a three-game sweep of Oakland with a 5-4 win in 11 innings.

Guerrero had three hits in 12 at bats in the series, including a double in his debut on Friday in the ninth inning of Toronto's 4-2 win over Oakland.

The level of expectation was high at Rogers Centre when he made his first plate appearance in that game, with the 28,688 in attendance giving him a standing ovation as he walked to the batter's box. Thousands of fans held up camera phones for every pitch to capture what could be a magic moment in Guerrero's young career. Chants of "Vladdy" or "Let's go Vlad" could be heard throughout the game.

According to Sportsnet, an average of 909,500 Canadians tuned in to watch the Guerrero's debut on Friday, making it the most-watched Blue Jays game this season. Toronto's series with Oakland reached four million fans across the country.

That excitement was infectious, spreading to the Blue Jays clubhouse.

"It's been awesome, he's brought a lot of positive vibes. Everyone knows the kind of player he is," said pitcher Trent Thornton, who said Guerrero is a "huge addition" to Toronto's roster. "We're 3-0 with him right now, so it's a pretty nice feeling."

Guerrero played at four minor-league levels last year, spending most of the season at double-A New Hampshire. His hitting was impressive — a .381 overall batting average and a 1.073 OPS (on-base plus slugging). He hit .336 with a .978 OPS in 30 games with the Bisons in 2018.

Guerrero had three homers and eight RBIs in eight triple-A games this spring.

Most fans hoped that Guerrero — considered the top prospect in baseball — would be part of Toronto's opening day roster, but an oblique injury suffered during spring training derailed that possibility.

After coming off the injured list Guerrero spent two weeks with the Bisons where he had a .367 batting average. The Blue Jays announced after Wednesday's 4-0 loss to the San Francisco Giants that Guerrero would finally debut on Friday, conveniently after an off day that would allow fans to buy tickets to the game.

"He's a really good player, man. He's going to do whatever he wants in the game," said veteran first baseman Justin Smoak. "At 20 years old, I couldn't imagine, y'know what I mean? He can hit, he can flat out hit. He's showed that he can play third base really well too."

Toronto manager Charlie Montoyo put Alen Hanson in as a pinch runner for Guerrero after he reached base in the ninth inning of both Friday and Sunday's game. Montoyo insisted it wasn't a slight on Guerrero's ability on the basepaths.

"Listen, I do it for Smoak too," said Montoyo. "Hanson is faster, Socrates Brito is faster. If I have those guys on the bench, I'm going to do it. I figure that ninth inning was out best chance to win the game because Oakland's bullpen is nasty."

The Blue Jays have now won seven of their past 10 games as they head to Anaheim, Calif., to take on the Los Angeles Angels. Guerrero is very familiar with the franchise as his father Vladimir Guerrero Sr. played six seasons of his Hall-of-Fame career there.

To a man, Guerrero's Toronto teammates think his arrival has given the team a lift.

"Twenty years old, No. 1 prospect in the game. To do what he's done in the minor leagues so quick, I can't imagine," Smoak said. "He deserves it and honestly he's handled it really well. The big leagues don't scare him. He's been around it since he was a baby.

"It's something where he's going to keep going out there and continue to have fun. I can't wait to see him get hot because it's going to be impressive."