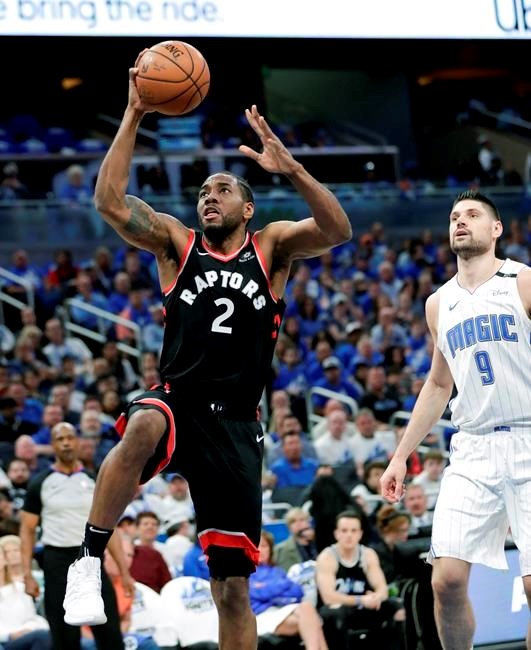 ORLANDO, Fla. — At this time last year, Kawhi Leonard was rehabilitating a serious injury and barely watching the playoffs. His fragmented season was over. His basketball future was uncertain.

On Sunday night, Leonard scored 34 points in a dominating performance to lead the Raptors to a 107-85 rout of the Orlando Magic, putting Toronto up 3-1 in a playoff series for the first time in franchise history.

Moments after the win, the soft-spoken player talked about how thankful he is simply to be playing.

"It was a down year for me. I love to play the game, and being injured is no fun . . . you just want to be out there on the floor with your teammates, feel that team spirit, chemistry, and just trying to focus on one goal," Leonard said, his white New Balance track jacket zipped high up his neck. "And that's something I was missing, just being out, sitting out — that's why it's a blessing this year just to be on the floor and be able to play, regardless of what the outcome is."

Leonard looked like he could single-handedly wrench the outcome in Toronto's favour on Sunday. Rebounding from flu-like symptoms that kept him out of practice a couple of days earlier in the week, Leonard had one stunning minute-long span in the first quarter: driving dunk, driving layup, and running dunk from a hand-off from Marc Gasol.

The 2014 Finals MVP had a similar stretch in the third to kill an Orlando run.

"It's a little bit of imposing your will . . . we've got a really good player that's going to get us baskets when we need them," coach Nick Nurse said. "I think psychologically that has an impact on a game."

Pascal Siakam and Norman Powell had 16 points apiece, while Serge Ibaka added 13. Kyle Lowry had nine points to go with nine assists for the Raptors, who can close out the best-of-seven opening-round series with a win on Tuesday in Toronto.

Aaron Gordon scored 25 points to lead Orlando, while Evan Fournier scored 19 and Nikola Vucevic added 11 for the Magic, who committed 17 turnovers that Toronto parlayed into 21 points.

Leonard had been under the weather in Friday's 98-93 win, scoring 16 points on 5-for-19 shooting, and Nurse revealed after the game that Leonard had missed a couple of days of practice.

"When you have good teammates with good chemistry guys tend to step up," Leonard said. "That is how you win games in the playoffs. It is not a one-man team, we all did it collectively through the whole year."

Leonard, who was sidelined for all but nine games last season with San Antonio with a quadriceps injury, shot 12-for-20 from the field on Sunday, adding six rebounds, two steals and two blocks. He utterly dominated on both ends of the floor.

"He's a Finals MVP," Gordon said. "He's doing what he's supposed to do. That's what they pay the man for, to come down here and be Kawhi Leonard."

When the final buzzer sounded, a disgruntled Orlando fan leaving his seat muttered: "It was boys versus men tonight."

It may as well have been.

The Raptors got off to a slow start, but pulled away with a big second quarter, and had built a 19-point lead by early in the third. The Magic pulled to within 10 midway through the third, and when Terrence Ross chucked up a 33-foot shot at the buzzer to end the frame, the three-pointer cut the Raptors' lead to 82-70 with one quarter left to play.

Montreal native Khem Birch converted a three-point play early in the fourth that pulled the Magic to within 11 points, bringing the Amway Center crowd to its feet. But the Raptors replied with a 10-0 run that quickly extinguished any Magic momentum and put the Toronto up by 21 points with 6:06 to play.

The pockets of red-clad Raptors fans roared when Siakam threw down an alley-oop dunk from Fred VanVleet with 3:34 to play that put Toronto up by 23 points, and sent scores of Orlando fans to the exits. Nurse went deep into his bench for the final few minutes.

"Road wins are the best, especially in the playoffs," Leonard said. "And obviously, we all know the job isn't done yet."

The Raptors shot 53 per cent — a franchise-record for a playoff road game — and outrebounded Orlando 45-34. The Magic made just seven of their 33 three-point attempts (21.9 per cent).

The Raptors defence was reminiscent of its Game 2 rout: locked in virtually from the get-go.

"In Games 2, 3 and 4 we've gone out there and really guarded," Nurse said. "That is who we are, are becoming, need to become, need to be each and every minute of each and every game — and done it pretty well three games in a row."

Orlando raced out to a 9-1 lead, but the Raptors settled down and when Leonard drove to the hoop for a dunk midway through the first quarter, Toronto took its first lead of the game. The Raptors shot 61 per cent in the first quarter and led 28-26 to start the second.

The Raptors outscored Orlando 30-16 in the second quarter. Siakam's three-pointer with 4.5 seconds left sent the Raptors into the halftime break with a 58-42 lead, the biggest of the game to that point.

Game 6, if necessary, would be Thursday in Orlando. The winner of this series meets either Brooklyn or Philadelphia in the Eastern Conference semifinals. The Sixers lead that series three games to one.