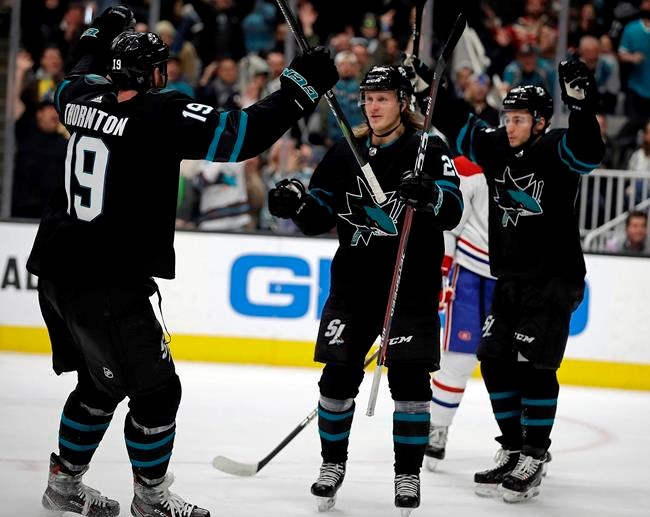 SAN JOSE, Calif. — With several players dealing with the flu, the San Jose Sharks managed to find a way to pull out a win that moved them closer to Calgary in the race for first place.

Tomas Hertl scored his career-high 30th goal of the season, Martin Jones made 37 saves and the Sharks extended their two-decade home dominance over the Montreal Canadiens with a 5-2 victory Thursday night.

"I think we gutted out a win tonight," coach Peter DeBoer said. "I think we're dealing with a little bit of flu going through the team and a little short-handed. I thought our goalie was our best player tonight, which gave us a chance, and I thought our third period, when we had to have a big period, we got our best period of the game. We did enough to win an important game."

Joe Pavelski and Brent Burns both missed morning skate with the illness and several other players have flu symptoms, leaving the Sharks a step slow for much of the night against the Canadiens.

But a couple of fortunate bounces and big saves by Jones were enough to give San Jose its 12th straight home win over Montreal since last losing on Nov. 23, 1999.

"You could just tell the lungs weren't with the guys," said Joe Thornton, who scored the winner on a pass that deflected off a Montreal player's stick. "Gutsy effort by a lot of guys tonight."

Marcus Sorensen and Timo Meier each scored for the third game in a row, and Gustav Nyquist added an empty-netter for his first goal since joining the Sharks. San Jose pulled within one point of Calgary in the race for first place in the Pacific Division and has a game in hand.

Artturi Lehkonen and Andrew Shaw scored for the Canadiens, who remained two points ahead of Columbus in the race for the final wild-card spot in the Eastern Conference. Antti Niemi made 20 saves.

"This place isn't an easy place for us to win," Lehkonen said. "We had our chances to get ourselves back in the game after trailing by two goals, but we couldn't."

The Sharks took a one-goal lead into the third and responded with their best period of the night, getting an insurance goal when Meier got a pass in front from Joonas Donskoi and knocked it into an open net. Nyquist's empty-netter provided the capper.

The teams had traded goals off odd deflections in the second period. Thornton's pass to Sorensen hit off the stick of Montreal's Phillip Danault and went into the net to put San Jose up 3-1 despite getting outshot 23-8 at that point.

But the Canadiens answered later in the period when Paul Byron's shot pinballed toward the net before hitting off Shaw and trickling past Jones to make it a one-goal game heading into the third.

The Canadiens controlled the play in the opening period, outshooting San Jose 16-5, but were on the short end of the scoreboard thanks to a couple soft goals allowed by Niemi. Hertl scored on a wraparound early in the period, and Sorensen then beat Niemi to the short side midway through the period to make it 2-0.

"We did a lot of little things right, but we had a couple of mistakes that allowed them to put the puck in the back of the net," Shaw said. "I had a turnover causing that first goal. That was a little mistake that ended up costing us the game."

Montreal struck late in the first when Lehkonen's pass got past Jones.

NOTES: San Jose's Brent Burns assisted on Sorensen's goal, giving him 60 on the season. The only to record 60 assists in a season since the start of the 1996-97 season are Nicklas Lidstrom (2005-05, 2007-08) and Erik Karlsson (2015-16). ... Karlsson (groin) and F Evander Kane (undisclosed) remained sidelined for a third straight game for the Sharks. ... Montreal rookie F Jesperi Kotkaniemi was a healthy scratch for a second straight game.