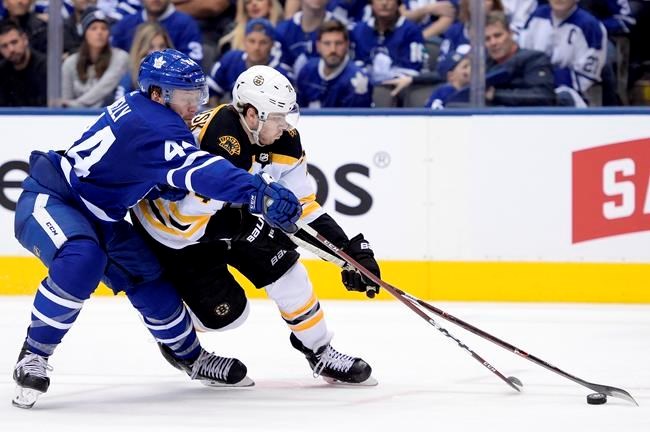 TORONTO — Jake DeBrusk met with his coaches ahead of Game 6 for some reassurance.

Held scoreless through the first five games of the series, the Boston forward was wondering if he should be doing something different.

DeBrusk didn't change a thing and broke the drought on Sunday, finishing off a give-and-go play with David Krejci for the game-winning goal as the Bruins forced Game 7 in their first-round series with a 4-2 victory over the Toronto Maple Leafs.

"It was just 'play your game and don't beat yourself up,'" DeBrusk said of the conversation with coach Bruce Cassidy and general manager Don Sweeney. "I think I put a lot of pressure on myself and this series has brought a lot of different emotions personally.

"(The message was) 'just do your part and try to chip in whether it's being physical or use my speed getting in on the boards.' I know (Cassidy) has trust in me and it's just one of those things I agreed with him and tried to take that in to tonight’s game."

DeBrusk, who had 27 goals and 42 points in the regular season, had just one assist and a minus-2 rating through the first five games against the Leafs. The 22-year-old scored six times last spring — with five coming against Toronto, including two in the Game 7 clincher that pushed Boston into the second round.

With the Bruins leading 2-1 midway through the second, DeBrusk crossed the Maple Leafs blue line, dropped a pass for Krejci, and then cut inside on Andreas Johnsson while going to the net to re-direct Krejci's feed past Frederik Andersen.

"The goal he scored tonight, very happy for him," said Cassidy. "He got inside and that was basically the message — shoot the puck when you get a chance and get inside. He had another chance late, and it's good to get him going."

The goal was DeBrusk’s first since his two-goal, one-assist performance in the Bruins' regular-season win over the Columbus Blue Jackets on April 2.

The Edmonton native was also able to get more involved physically. In Game 2 he had four hits and several run-ins with Leafs forward Nazem Kadri, who was later suspended for the duration of the series for a high hit on the Bruins forward.

On Sunday, though he was only credited with a single hit, he had a couple more run-ins with Leafs defenceman Morgan Rielly.

"I think it was more intense, got into more scrums there," DeBrusk said. "I'd say more similar to Game 2, but also I didn't mind my game. It's starting to come around and that's really encouraging for myself, but in saying that, it's going to be intense in Game 7.

"It's the most intense game of the year. I remember last year how nervous I was before the game and I feel like it's going to be the same thing this year."