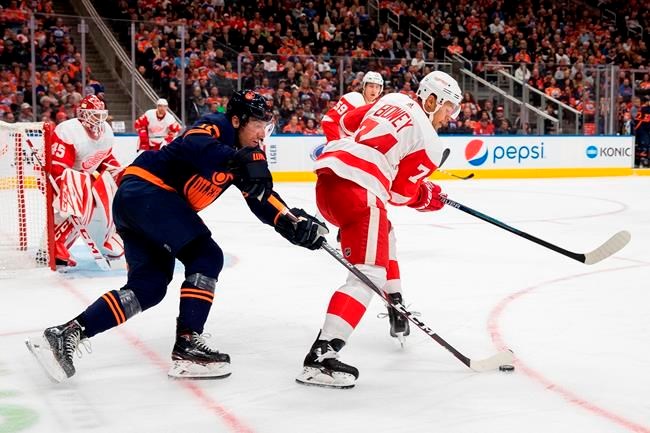 WINNIPEG — James Neal didn't feel like himself last season and knew he had to do something about it.

The new Edmonton Oilers forward dialed up his off-season training in the gym and on the ice so he'd be ready for a fresh start after a disappointing season with the Calgary Flames sparked a trade between the Alberta rivals in July.

Neal said he "put a ton of work in" with skating coach Shawn Allard and former NHLer Gary Roberts, who now focuses on physical training. He added he was on the ice with Allard at 6:30 a.m., four times a week starting in July.

"I wanted to get back to being myself," Neal said before Edmonton's 1-0 shootout loss to the Winnipeg Jets on Sunday.

The extra work has paid dividends for the 32-year-old native of Whitby, Ont., and the Oilers.

After putting up only seven goals and 12 assists in 63 games with the Flames — far off his run of 20-plus goals in 10 straight NHL seasons — Neal has already surpassed that lowly goal output.

He's tied with Boston's David Pastrnak for most goals in the league with nine and has 10 points in nine games.

Neal set an Edmonton franchise record for most goals (seven) through the first four games of the season, breaking a mark held by Glenn Anderson and Wayne Gretzky.

He also scored a career-high four goals in a 5-2 win Oct. 8 over the New York Islanders.

Neal's hot start has helped the Oilers get off to a 7-1-1 start, good for first in the Pacific Division. It's a welcome change for a team that has missed the playoffs 12 of the past 13 seasons.

"It feels good. It pays off," Neal said of his extra training. "A lot of it is mental, too.

The Flames signed Neal as a free agent in July 2018, giving him a five-year, US$28.75-million contract with an annual average salary of $5.75 million.

He'd come off back-to-back seasons of playing in the Stanley Cup final, with Vegas in 2018 and Nashville in 2017.

Both those long playoff runs didn't allow him a lot of time to recover and train in the summer, he noted.

"I think you don't understand what goes into going to the finals and how bad your body's beat up and what you're left with."

Still, he was committed to contributing to the Flames and can't put his finger on exactly what went wrong.

"They were paying me a lot of money to come in and score goals and be a big part of that team," said Neal. "I came in and played in a third- and fourth-line role.

After his trade to Edmonton for Milan Lucic, Neal had lunch in Toronto with new Oilers head coach Dave Tippett, who'd been his coach when his NHL career started in 2008-09 with the Dallas Stars.

"He was excited," Tippett recalled of the meeting. "He was looking forward to the change and excited to come to a team where he was going to get more opportunity than he got last year and excited to see what he could do.

"And. obviously, he's jumped in and he's played very well for us."

Neal is on a line with centre Ryan Nugent-Hopkins and Alex Chiasson. He's also skating on the top power-play unit with Connor McDavid and Leon Draisaitl. Six of his goals have come with the man advantage.

"He's really battled around the net to get good opportunities to put pucks in," he said. "He also is a guy who creates loose pucks and he's easy to work with.

"It's always good to see a guy like that, when you hear all the talk about the season last year and what not, come back and already have this good of a start. It's definitely cool to see."

This report by The Canadian Press was first published Oct. 21, 2019.