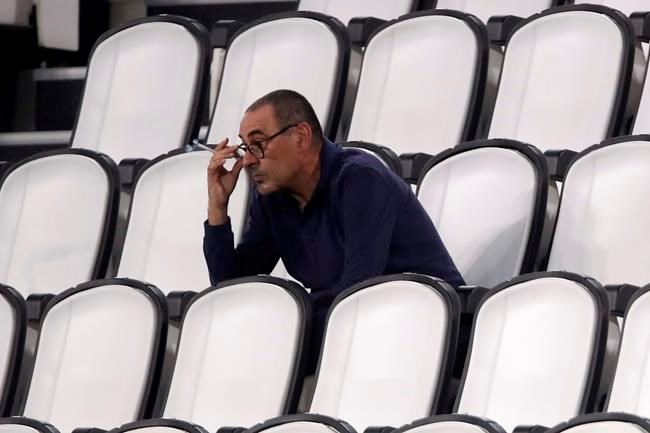 Despite winning the Italian title, Sarri paid the price for the round-of-16 loss to Lyon on Friday.

“The club would like to thank the coach for having written a new page in Juventus’ history with the victory of the ninth consecutive championship, the culmination of a personal journey that led him to climb all the divisions of Italian football," the team said.

Sarri also left Chelsea last year after only one season in charge -- despite winning the Europa League with the London club.

While he led Juventus to a record-extending ninth straight Serie A title, the Bianconeri never really adapted to his quick-passing style and lost four of 12 matches during the restart.

Amid so much dominance domestically, the true test for any Juventus coach comes in the Champions League -- a competition the Turin club has not won since 1996.

Juventus was eliminated on away goals despite securing a 2-1 victory in the rearranged second-leg home match against Lyon.

Juventus forward Cristiano Ronaldo made no mention of Sarri in a message posted on Instagram after the Juventus announcement.

“The 2019/20 season is over for us, much later than usual but yet sooner than we expected,” Ronaldo said. “Now it’s time for reflection, time to analyse the ups and downs because critical thinking is the only way to improve.

“Winning the Serie A once again in such a difficult year is something that we are very proud of. ... But the fans demand more from us,” added Ronaldo, who scored both of Juve's goals against Lyon. “May this short vacation break allow us all to make the best decisions for the future and come back stronger and more committed than ever.”

According to media reports, potential replacements for Sarri include former Juventus player and current Real Madrid coach Zinedine Zidane, Lazio's Simone Inzaghi, former Tottenham coach Mauricio Pochettino and Massimiliano Allegri — who has been out of work since leaving Juventus a year ago after leading the team to five straight Italian titles.

Another potential replacement could be former Juventus and Chelsea coach Antonio Conte, who recently revealed he was unhappy at Inter Milan.

Next season's Serie A is scheduled to start Sept. 19.