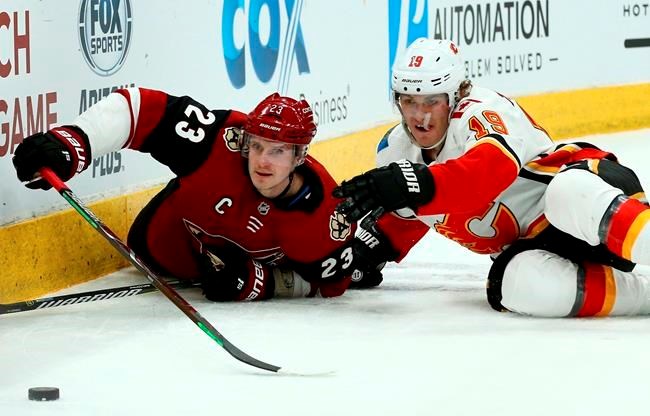 GLENDALE, Ariz. — With a hot goaltender and a nice run of winning, the Arizona Coyotes have tightened the race for a wild-card playoff spot in the Western Conference.

Darcy Kuemper's play in net made a big difference again, as he made 30 saves to shut out the Western Conference-leading Calgary Flames in a 2-0 Coyotes victory Thursday night.

Clayton Keller and Jakob Chychrun scored for the Coyotes, who sent the suddenly struggling Flames to their fourth straight defeat.

Kuemper improved to 16-4-3 in goal since Jan. 1 and logged his third shutout of the season. Arizona has won seven of eight and kept pace with wild-card leaders Dallas and Minnesota. The Coyotes are three points out of the second wild-card spot in the West.

Kuemper had to face an extra attacker for the final 4:35 of the game after Calgary pulled goalie Mike Smith.

"They needed to ... I guess with the timeout they thought they could draw something up and maybe catch us by surprise," Kuemper said. "But the guys did a great job defending."

The Flames were shut out for the first time since losing 2-0 at Dallas on Dec. 18, and were held scoreless for the fourth time this season. Calgary had won the previous three meetings with Arizona by a combined score of 18-4.

"They've kind of had our number," Chychrun said. "We kind of owed them one."

Keller's 13th goal of the season came at 10:16 of the first period, and gave the Coyotes a 1-0 lead. Christian Dvorak skated up the wing with the puck and timed a pass across the Calgary zone to Keller. The Flames defender had fallen trying to block the delivery, but the puck reached Keller for a wrist shot into the net.

The Flames had a couple of quality chances miss just wide or over the net in the first.

"We're playing well in our own zone, we're playing well defensively," Flames coach Bill Peters said. "We're having a hard time getting it to go and some of the execution could be a little bit better, but I think once we get one or two, I think it'll start to come again."

After a scoreless second period, the Flames opened the third on a power play. Mark Giordano's shot deflected off teammate Elias Lindholm in front of the net and pinged off a goalpost in the final seconds of the man advantage.

Chychrun fired in a rebound that came out to him at 2:49 of the third period, after Dvorak tried to stuff the puck past Smith.

The Flames challenged the goal for goaltender interference, but it was upheld.

Smith, a former Coyotes goaltender, had 23 saves including one on Keller on a breakaway in the third period.

"It's hard to score, it's hard to win this time of year," Smith said. "There's no sense of getting frustrated about it, we have to be better."

Vinnie Hinostroza missed a penalty shot with 7:26 to play that would have extended the Coyotes' lead.

"If we stick to our game plan, that's the key," Coyotes coach Rick Tocchet said. "I felt we had more guys invested in what we were trying to do."

NOTES: Coyotes F Michael Grabner played in his first game since Dec. 1, a span of 41 games he missed after taking a stick to his right eye. "It was a lot of fun. I'm sick of skating by myself out there, so it was nice to get back out there and play a meaningful game," he said. ... Coyotes F Josh Archibald was given a two-minute penalty for embellishment after he was taken down on a rush in the third period. ... The Flames played their eighth back-to-back set of games this season after playing at Vegas on Wednesday. ... Former Flames star Theo Fleury was named an inductee into the Alberta Hockey Hall of Fame on Thursday.