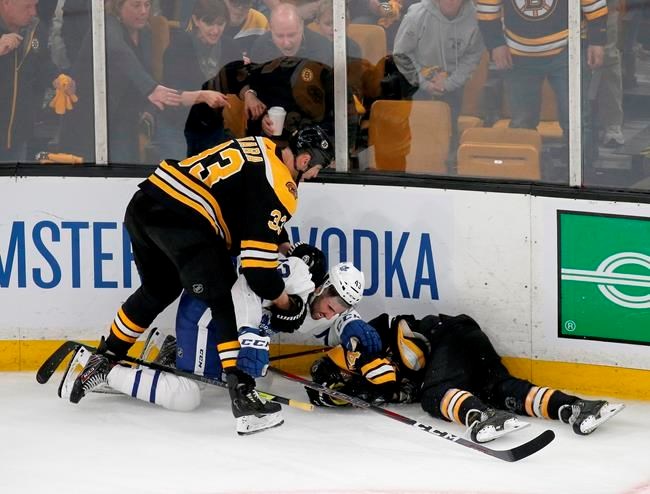 NEW YORK — The Toronto Maple Leafs will have to do without Nazem Kadri for the rest of their first-round playoff series with the Boston Bruins.

The centre was suspended for the rest of the series by the NHL on Monday following his cross-check to the head of Boston winger Jake DeBrusk in the third period of the Bruins' 4-1 victory in Game 2 on Saturday.

It could have been a longer suspension for Kadri. He was offered an in-person hearing by the NHL, meaning the league had the option to suspend him for more than five games.

"It's unfortunate for us because he's a big part of this team," Maple Leafs centre Auston Matthews said. "He's a guy that plays a 200-foot game for us. He plays both sides of the puck, power play, he can actually score in waves. Obviously a guy you'd like to have in the lineup."

Kadri laid the vicious cross-check after DeBrusk hit Leafs veteran Patrick Marleau into the curved glass at the end of the bench. Kadri was assessed a major penalty and a game misconduct after the hit.

"This is not a hockey play. Instead, this is a player retaliating against an opponent by using his stick as a weapon," the league's department of player safety said in a video.

The league added that Kadri's poor disciplinary track record was another factor in determining that supplementary discipline was necessary.

"The edge for everybody's a little bit different, to be honest with you," Maple Leafs coach Mike Babcock said before the NHL handed down its decision. "But obviously any time you put yourself in a situation where someone else gets to decide your future, probably not a good thing in anything you do in life."

Kadri and DeBrusk had a running battle throughout Game 2. The pair wrestled on the ice in the first and were assessed two minutes each for roughing, with DeBrusk punching Kadri in the face. The Leafs forward then stayed down after taking knee-on-knee hit towards the end of the second before skating off and returning for the third.

Kadri was banned three games for boarding on Bruins winger Tommy Wingels the opener of last year's first-round series with the Bruins. Boston won that series in seven games.

The 28-year-old Kadri has now been suspended five times in his career. He has also been fined three times — twice for diving embellishment and once for an inappropriate throat-slashing gesture.

Toronto won Game 1 of the series 4-1 score at TD Garden. Game 3 was played Monday at Toronto's Scotiabank Arena, with Game 4 scheduled there on Wednesday.

Game 5 is set for Friday back at TD Garden.