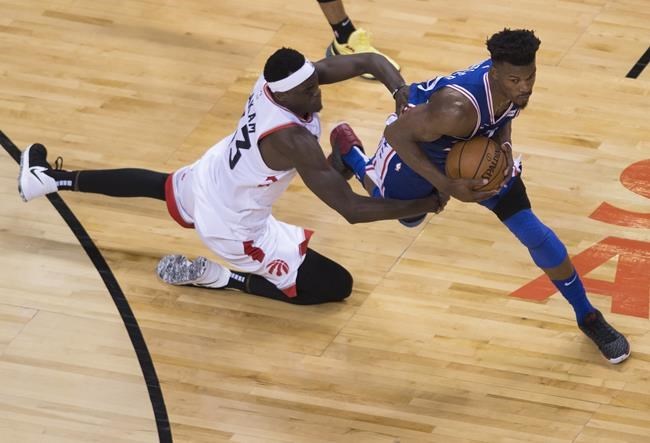 TORONTO — Kawhi Leonard couldn't do it alone. But he gave it a good try.

The Raptors star scored 20 of his 35 points in the second half on Monday after Toronto's worst first half of these playoffs, but he got little help from his teammates in an ugly 94-89 loss to the Philadelphia 76ers.

The best-of-seven Eastern Conference semifinal series now heads to Philadelphia for Thursday's Game 3 tied at one game apiece. And the Raptors have to hope some of their other players can get going at what's sure to be a raucous Wells Fargo Center.

Pascal Siakam had 21 points for the Raptors, who overcame a 19-point deficit to make it a game down the stretch. Kyle Lowry had 20 points. The rest of the Raptors? Marc Gasol was the next highest scorer with five points.

"Didn't start out very good with flow and rhythm and stuff," the coach said. "But we picked it up."

Jimmy Butler had 30 points and 11 rebounds to top the Sixers, while Joel Embiid, who was a game-time decision after battling the stomach flu, finished with 12 points.

It was no surprise the Sixers would come out a different team than the one the Raptors ran roughshod over in Game 1.

"That's normally the case from the team that goes down 0-1 or loses the last game," Nurse said pre-game. "I think that's always the thing you remember."

The Raptors clearly didn't remember. The Sixers threw different defensive looks at the Raptors, who were outscored in the first quarter for the first time this post-season and trailed by 19 points midway through the second.

"I thought our defence at the start of the game was almost as good as it could be," Sixers coach Brett Brown said.

In a first-half offence that moved like sludge, Leonard managed 15 points despite facing a swarm of Philly defenders. The rest shot a dismal 9-for-36 combined. The best three-point shooting team in the league hit just three of their 15 shots from behind the arc. And they were thoroughly outhustled, managing a woeful 13 rebounds to Philly's 33.

If there was a positive, it's that as terrible as Toronto was, the home team only trailed by 13 at the break.

"It was easy to just sit back and let the game go, but we fought hard and I'm just proud that we did that and I think it's good for us and we'll just go back, watch film and just get ready for Game 3," Siakam said.

How is it good?

"I think adversity is always good," he said. "We won Game 1, but at the same time we knew it wasn't going to be an easy series."

The Raptors found another gear in the third quarter. They outscored the Sixers 25-18, held them to 29 per cent shooting, including 0-for-11 from three-point range, and when Gasol connected on a pair of free throws with 2:50 left in the quarter, it capped a 17-8 Raptors run and sliced the deficit to just a point.

The Raptors went cold to start the fourth, missing all but one of their first seven shots, and when Ben Simmons strolled through Toronto's defence for an easy layup with 8:43, it was back to an 11-point deficit. The visitors would go up by 13 before the Raptors clawed their way back again. A pair of three-pointers by Lowry cut the deficit to three points with 1:36 to play. A Siakam basket with 46 seconds left made it a one-point game.

A big basket by Embiid gave the 76ers a three-point lead, and Green — who was 1-for-6 from the three-point line on the night — missed on a three-point attempt with about five seconds to play and it was game over.

The Sixers' victory snapped a 14-game losing streak at Scotiabank Arena, going back to November of 2012.

"Everybody wants to paint the picture that we haven't won here in how many years but I'm just glad that we came out on top," Butler said. "We don't care how many games we've lost or nothing like that. Going home we just need to do the same thing we did tonight."

The Raptors shot just 27 per cent from the three-point line and were clobbered on the boards 53-36.

For a brief couple of minutes, the Raptors looked like the dominant team of Game 1, grabbing an early 4-0 lead. But Toronto couldn't buy a basket — only four Raptors scored in the first quarter — and the Sixers went on a 21-10 run to take a 26-17 lead into the second.

Leonard had 11 points in the second quarter, but he got little help from his teammates, and when Butler shot the technical after Nurse argued a call, his basket gave the 76ers a 19-point lead. Butler would convert a five-point play — he was fouled on a three-pointer and Danny Green was whistled for a technical — later in the quarter. Green's three with 12 seconds left sliced Philly's lead to 51-38 at halftime.

Game 4 is Sunday in Philadelphia then the series returns to Toronto for Game 5.