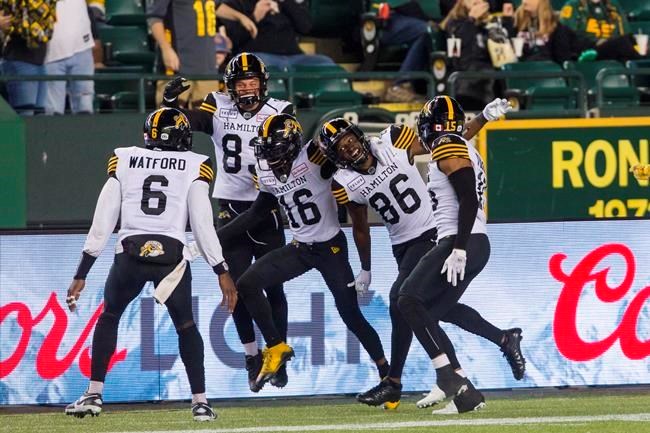 EDMONTON — The Hamilton Tiger-Cats are the first team in the CFL to capture a playoff berth. And it didn't come easy.

Lirim Hajrullahu kicked a 34-yard field goal that caromed in off the uprights as time expired, and the Tiger-Cats held off a big comeback attempt in a 30-27 victory over the Edmonton Eskimos on Friday.

“I am just thankful that it went in,” Hajrullahu said. “I saw it going in and all of a sudden it was taking a left turn and I was ‘whoa, whoa, whoa,’ but finally it hit the upright and went in and I was so happy.

“I am glad that we clinched the playoffs."

“I am just proud of our football team,” said Hamilton head coach Orlondo Steinauer. “We let them get some momentum and get the crowd behind them and get back into the game, but you have to credit our guys for hanging in there and battling adversity. And then we put it through the posts at the end."

The Eskimos (6-7) have dropped four games in a row.

“It’s a little bit frustrating to start out the way we did, but man, what a finish. And that's the CFL for you," said Eskimos head coach Jason Maas. “You're never out of it, you've just got to keep fighting. Our guys did that. I'm very proud of the locker-room.

“We didn't come out with the score today we wanted, but I think this helps us going forward.”

Hamilton got on the board first with six minutes left in the opening quarter when Brandon Banks reeled in a short Dane Evans pass and turned on the jets for a 42-yard touchdown. Anthony Coombs then caught a two-point conversion.

Just a minute later, on the heels of Frankie Williams intercepting Eskimos quarterback Logan Kilgore, Evans found a wide-open Marcus Tucker in the end zone for a 41-yard TD strike.

The Ticats potent air attack continued to be impressive when just three minutes after that Evans unleashed a long bomb to Bralon Addison for a 76-yard touchdown. Hamilton had 197 passing yards in the first quarter.

Hamilton went up 24-0 midway through the second on a 48-yard field goal by Hajrullahu.

Edmonton finally got something going on the final play of the second with a six-yard TD pass from Kilgore to DaVaris Daniels.

The Esks opened the scoring in the third with a 22-yard Sean Whyte field goal.

Edmonton kept crawling back with four minutes left in the third after a Mike Moore fumble recovery led to a 32-yard circus catch by Greg Ellison to close the score to 24-17.

The comeback continued to start the fourth as Kilgore took it in himself from the one to tie the game 24-24.

Hamilton nudged back ahead with a 38-yard Hajrullahu field goal with 6:37 to play.

Whyte was able to respond with a 48-yard field goal with 35 seconds left to knot the game back up before Hajrullahu sent his final field-goal attempt off the uprights and through for the win.

“I was a bit uneasy there, no doubt, but we came through this time," said Steinauer.

Both teams are on the road next week. The Tiger-Cats are in Winnipeg next Friday, while the Eskimos are Ottawa next Saturday.

Notes: Former Eskimos quarterback Ricky Ray was placed on the Edmonton Eskimos wall of honour at the half, becoming the 31st player on the wall. Ray is the all-time Eskimos passing leader with 40,531 yards and is fourth all-time in CFL passing yards (60,736)… Kilgore got the start at quarterback for the Eskimos in place of inured Trevor Harris in the game. He made his first career start with the Argos for an injured Ricky Ray in 2016.

This report by The Canadian Press was first published Sept. 20, 2019.