Liverpool, City win to set up duel for EPL title 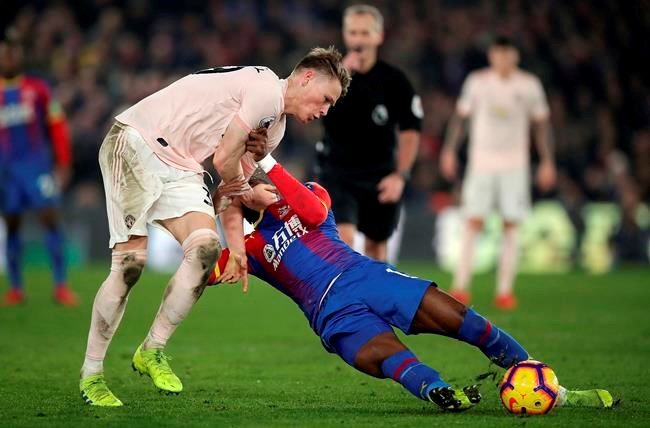 The Premier League title race looks to be a duel between Liverpool and Manchester City after the top two collected contrasting home wins on Wednesday and third-place Tottenham lost at Chelsea for a second defeat in five days.

Just when questions were starting to be asked about Liverpool's credentials, the leaders delivered their biggest victory of the season: A 5-0 thrashing of Watford at Anfield.

That's the kind of scoreline City has been producing in recent weeks but, after needing extra time and penalties to win the English League Cup on Sunday, Pep Guardiola said he'd be happy with any kind of win against West Ham three days later.

A second-half penalty from Sergio Aguero secured a 1-0 win for City, which stayed a point back in second place.

Tottenham's title bid is likely over, though, with 10 games remaining. And it disintegrated in quite embarrassing fashion at Stamford Bridge, with Kieran Trippier's own goal — following a mix-up with goalkeeper Hugo Lloris — clinching a 2-0 win for Chelsea.

With Tottenham having also lost at Burnley on Saturday, the team is now nine points off the lead and only four ahead of Arsenal, which beat Bournemouth 5-1 to strengthen its grip on fourth place.

Tottenham and Arsenal meet in the north London derby on Saturday at Spurs' temporary home of Wembley Stadium.

"Tonight makes it impossible to fight Man City and Liverpool," Tottenham manager Mauricio Pochettino said. "Only they can win the league."

Manchester United is one point further back in fifth after beating Crystal Palace 3-1 for a club-record eighth straight away win.

Chelsea didn't even need the world's most expensive goalkeeper to derail Tottenham.

Kepa Arrizabalaga was dropped to the bench as punishment for refusing to be substituted in the League Cup final loss to City. Reasserting his authority after a star player's high-profile show of insubordination, Chelsea coach Maurizio Sarri chose instead to start Willy Cabellero — and the team's second-choice goalkeeper was barely troubled.

Instead, the focus ended up on the visiting 'keeper.

In a humiliating passage of play in the 84th minute, Tottenham right back Kieran Trippier didn't look up as he attempted a back-pass to goalkeeper Hugo Lloris. The France captain had come out of his goal, though, and saw Trippier's pass go by his left side and trickle into the net. Trippier and Lloris both stared at the ground.

Pedro Rodriguez put Chelsea ahead in the 57th minute, his shot from an acute angle going through Lloris' legs.

With Mohamed Salah going through a barren run, Sadio Mane is the forward Liverpool is counting on for goals at the moment.

The Senegal international made it six in his last six league games by scoring the opening two goals against Watford — the second a delightful back-heel into the net from 12 past stunned goalkeeper Ben Foster.

Center back Virgil van Dijk also scored twice, both headers from crosses, after Divock Origi had made it 3-0.

It was a good evening for Liverpool's defenders, with right back Trent Alexander-Arnold setting up three goals and left back Andrew Robertson assisting with the other two.

"Let's enjoy the ride and see how far it takes us," said Klopp, whose side has still only lost one league game all season.

After recent hat tricks against Arsenal and Chelsea, Aguero was again the match winner for City — this time with a solitary goal.

The Argentine striker tucked away a penalty after substitute Bernardo Silva was fouled on a mazy run into the penalty area.

Aguero is now the top scorer in the league with 18 goals.

With three straight wins, Arsenal has found form just at the right time going into the north London derby at the weekend.

Henrikh Mkhitaryan starred against Bournemouth, scoring one goal and setting up two more for Pierre-Emerick Aubameyang and Laurent Koscielny. Mesut Ozil and Alexandre Lacazette were the other scorers.

That result at Emirates Stadium ensured Man United remained outside the top four despite another impressive performance under Ole Gunnar Solskjaer.

Romelu Lukaku scored twice and Ashley Young added the third for injury-hit United in its win at Palace.

In the other game Wednesday, Southampton climbed out of the relegation zone by beating Fulham 2-0.

Steve Douglas is at www.twitter.com/sdouglas80