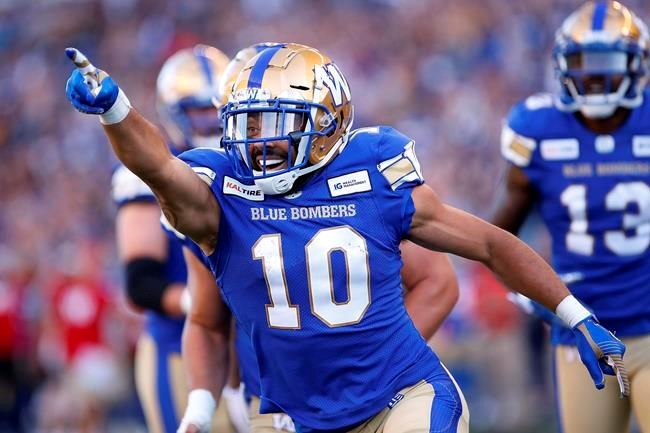 WINNIPEG — Matt Nichols couldn't hide his wonder and admiration as he talked about the talents of new Winnipeg Blue Bombers receiver Lucky Whitehead.

Whitehead caught a pair of touchdowns to help the Bombers win their first home-opener in five seasons with a 28-21 victory over the Edmonton Eskimos on Thursday.

Nichols threw touchdown passes of 75 and 41 yards to Whitehead, who showcased his speed and elusive skills in front of 25,336 fans at IG Field.

"The later touchdown is something that, I mean, not many people in the world can turn that into a touchdown," Nichols said of Whitehead, who played 30 games with the NFL's Dallas Cowboys, mostly as a returner.

"Usually that would be a 12-, 13-yard gain, pushed out of bounds, and somehow he scored a 40-yard touchdown. So he's lightning in a bottle, for sure."

Sean Whyte's seven field goals, which he thought was a career-high for a game, accounted for all of Edmonton's (2-1) scoring.

"Honestly, I just think we beat ourselves," said Whyte, whose field goals ranged from 10 to 45 yards. "They're two great teams. I think we're evenly matched.

"If we stop killing ourselves with penalties and we start doing the right things that we know we should be doing, we should beat every team in this league."

Following a trend this season, the Eskimos had 13 penalties for 139 yards. In their first game of the season against Montreal, they had 118 yards in penalties. Against B.C., it was 165 yards.

Nichols completed 13 of 21 pass attempts for 200 yards with three TDs and one interception. Trevor Harris was 35-of-54 for 345 yards with no TDs and no picks.

Edmonton attempted a comeback late in the game, but fell short.

The Eskimos turned the ball over on downs with 1:06 remaining, but when Harris rushed the ball for Winnipeg, he fumbled for the second time in the game. It was recovered by Eskimos Jordan Hoover and Edmonton took over at Winnipeg's 51-yard line.

Harris couldn't connect with his receivers and the Eskimos turned the ball over on downs with 17 seconds left.

"We have a team that believes in each other and we're going to battle till the very last whistle no matter what," said Harris, adding execution was inconsistent and penalties hurt again.

Demski did the heavy lifting for Winnipeg's first TD, deking and cutting his way across and down the field for a 35-yard gain. He capped it off with a seven-yard run into the end zone at 8:29 of the first quarter.

Nichols flung the ball to Whitehead on the first play of their next possession. He got behind coverage, hauled the ball in and ran another 39 yards to tally a 75-yard TD with under a minute left in the opening quarter.

"It was a breakout for me, just to show my speed," a smiling Whitehead said. "It was just an overall great game."

Whyte connected on a trio of field goals in the second quarter, two after Winnipeg turnovers.

He was good on a 20-yarder at 11:55 and then added another from 10 yards out after Harris fumbled the ball and the Eskimos took over at Winnipeg's 20-yard line.

Nichols had a pass tipped and the ball went into the hands of defensive back Brian Walker. The turnover resulted in Whyte booting a 45-yard field goal as time expired in the first half.

Bombers rookie running back Brady Oliveira was carted off the field late in the second quarter after injuring his right ankle during a kickoff.

A successful Winnipeg coach's challenge led to an Edmonton pass-interference penalty. Harris then caught a five-yard TD pass at 2:20 of the third quarter to boost the lead 21-12.

Whitehead recorded his second TD at 10:19 of the third after eluding a number of defenders as he zigged and zagged his way into the end zone.