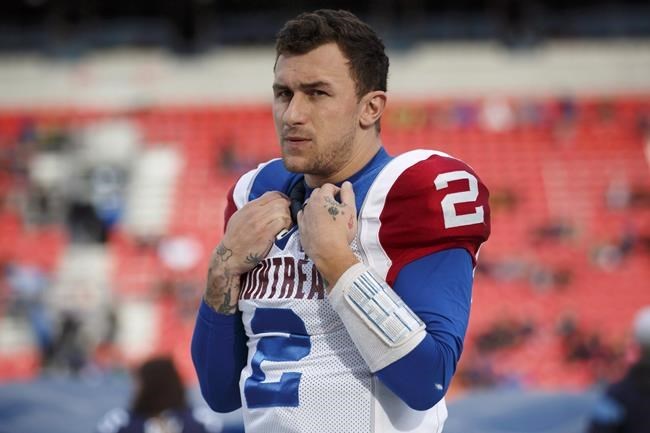 He entered the CFL with much fanfare and intrigue, but Johnny Football has made a mysterious exit.

The Johnny Manziel experiment ended less than a year after it began Wednesday with the CFL terminating the quarterback's contract with the Montreal Alouettes. The league also informed the eight other clubs it wouldn't register a deal for the former Heisman Trophy winner if any tried to sign him.

CFL commissioner Randy Ambrosie said Manziel had contravened an agreement that made the Texan eligible to play in the league.

"We advised Montreal that Johnny had violated one of the conditions we had set for him to be in our league. And Montreal announced his release today," Ambrosie said Wednesday in Vancouver. "We didn't release the terms of those conditions then and we're not going to do that now.

"We're trying to do what we believe is in the best interests of the entire league. The conditions we set, we thought were the right ones. Those conditions have been violated and we feel it's best, and Montreal feels it's best, to let Johnny move on. And we think it's best for our league that he do the same. And we wish him well."

A posting to Manziel's Twitter feed indicated he was already looking for other opportunities south of the border.

"I want to thank (Alouettes coach Mike Sherman), my teammates, and the CFL fans," Manziel tweeted. "My time there re-established my love for the game of football and the work that goes into it. I look forward to exploring new options within the United States."

One option could be Alliance of American Football, which kicked off its inaugural season earlier this month. And Manziel said he was intrigued by the prospect of playing in either the AAF or Xtreme Football League, which is scheduled to resume play next year.

"It's great for football, it's great for the guys who need more opportunity, need more film and time to play," Manziel said on the Barstool Sports Comeback SZN podcast. "I don't know exactly what my exact steps will be for the next years coming up, but at least there's a lot of options.

"Me and E.B. (agent Erik Burkhardt) are fully committed to playing ball and trying to get into the best situation possible and that's what it's all about."

Ambrosie announced in December 2017 the league would approve a contract for the former Cleveland Browns first-round pick, who was on the Hamilton Tiger-Cats negotiation list at the time. But Manziel had to fulfil certain requirements to join the league.

The CFL's due diligence included an assessment by an independent expert on domestic violence and a head-to-head meeting between Manziel and Ambrosie. Manziel had sought treatment for anger management and alcohol abuse as part of his acquittal on a 2016 charge of domestic violence.

Manziel eventually ended up signing with Hamilton in May 2018 but was unable to get on the field with Jeremiah Masoli taking starting reps. The Ticats dealt Manziel and offensive linemen Tony Washington and Landon Rice in a blockbuster trade with Montreal on July 23 for receiver Chris Williams, defensive end Jamaal Westerman and two first-round draft picks (2020, '21).

The move reunited Manziel with Sherman, who also recruited Manziel to Texas A&M. Acquired to be Montreal's No. 1 quarterback, the 26-year-old was 2-6 as a starter, completing 106-of-165 passes (64.2 per cent) for 1,290 yards with five TDs and seven interceptions.

"When we made the decision to make the trade for Mr. Manziel, we knew the risks that went with it," Reed told reporters in Montreal. "We took a chance, we took a risk, an educated risk and it didn't work out.

"That's the situation. We have a stable plan that will allow our football team to advance."

Manziel was due a $75,000 bonus March 1 and scheduled to earn a $202,000 base salary in 2019. Manziel's departure leaves Montreal with five quarterbacks on its roster (Vernon Adams Jr., Jeff Mathews, Antonio Pipkin, Matthew Shiltz and Canadian rookie Hugo Richard).

Reed feels Montreal has its '19 starter in that group. The Alouettes have struggled, both at quarterback and on the field generally, since Hall of Famer Anthony Calvillo — now a coach at the University of Montreal — retired after the 2013 season.

During Calvillo's tenure in Montreal (1998-13), the franchise appeared in eight Grey Cup games, winning three. Calvillo — the most prolific passer in pro football history — was instrumental in that success, being named a league all-star five times and capturing its outstanding player award on three occasions.

"Our fans have been long suffering for a stable quarterback situation and a stable team and a franchise committed to stability," Reed said. "You have to go through the pain of the process of getting there.

"This process took a while to be broken and get to a point where it was and it's going to take a while to get back to where we need to be."

Manziel's CFL action was his first in pro football since December 2015.

He captured the 2012 Heisman Trophy and was taken in the first round, No. 22 overall, in the 2014 NFL draft by the Browns. But following two tumultuous seasons, the Browns released Manziel in March 2016 after he posted a 2-6 record as their starter.

Manziel appeared in just 14 games with Cleveland, completing 47-of-258 attempts (57.0 per cent) for 1,675 yards with seven touchdowns and seven interceptions. He also ran for 259 yards and a touchdown.

Manziel had been out of football until signing with Hamilton. Former Ticats head coach June Jones, who is now the team's offensive co-ordinator, once boldly gushed about Manziel's potential.

"I think he'd be the best player to ever play up here," Jones said. "He can throw it and he can run it like nobody ever has been able to do."

— With files from Gemma Karstens-Smith in Vancouver