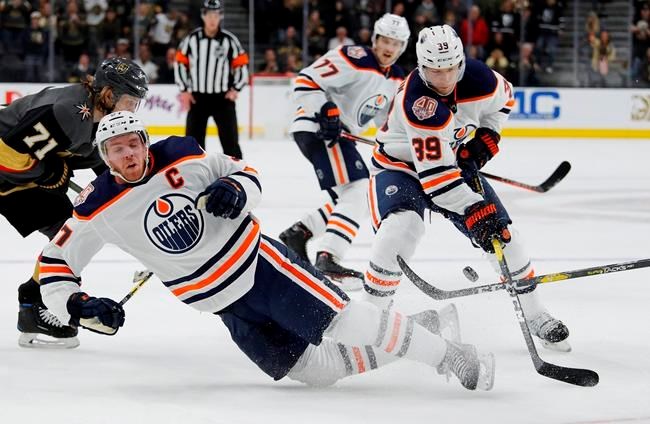 Though the Golden Knights already became the seventh NHL team to make the playoffs in each of its first two seasons, Gallant insisted the final three games mean plenty to them.

Jonathan Marchessault scored his sixth game-winning goal and Vegas earned a 3-1 victory over the Edmonton Oilers.

"Tonight was a perfect game for me," Gallant said. "Going down the stretch, the games don't mean nothing in the standings, but keep guys going, keep them going well, and I thought they played a good, solid game."

With third place in the Pacific Division and a first-round playoff date with San Jose already locked up, Vegas ended a five-game losing streak. The Golden Knights won the season series 3-1, outscoring Edmonton 15-9.

Cody Eakin and Pierre-Edouard Bellemare also scored for Vegas, which is 11-4-2 since the trade deadline.

Malcolm Subban stopped 18 shots while making his ninth straight start in place of Marc-Andre Fleury. Subban ended an 0-3-2 skid since earning his first career shutout on March 21 and has a 2.67 goals-against average during the nine-game span.

"It was a good win, for sure. It felt good. It was a good team win," Subban said. "You always want to try and get the first goal and play in front — that obviously helps a lot over the course of the game. That makes it a little bit easier."

Eakin gave the Golden Knights a 1-0 lead early in the first period when he gathered the puck just outside the blue line, skated to the top of the right circle and roofed a wrist shot past Edmonton goaltender Mikko Koskinen.

"Every game is important this time of year and we want to build some good habits. Tonight was a good start and we'll continue that," Eakin said. "I think we know how we need to be successful. I thought we had some good habits tonight to get back to that winning way."

Marchessault's eventual game-winner came 51 seconds into the second when he poked the puck away from Leon Draisaitl in the defensive zone, broke free alone and beat Koskinen with a backhand between his legs to make it 2-0. Marchessault has scored a point in 17 of his last 26 games, with eight goals and 15 assists.

The Oilers, meanwhile, started the game with their playoff hopes intact but were eliminated from contention midway through the first period when Colorado earned a point in a shootout loss at St. Louis.

"It is what it is — we're out. It doesn't matter how many points you miss by, there's eight that are in, and eight that are out," coach Ken Hitchcock said. "At this time of year you want your team to compete at a high level and for the most part we did."

Koskinen made 28 saves and Connor McDavid tied a career best with his 41st goal for Edmonton. McDavid was left alone in the right circle, received a pass from linemate Zack Kassian and fired a wrist shot through Subban's legs to make it 2-1.

NOTES: Vegas RW Reilly Smith celebrated his 28th birthday. ... With his assist on Bellemare's goal, William Karlsson has scored a point in 11 of 15 games, with six goals and 11 assists. Karlsson is two shy of 100 career assists ... Fleury was scratched again and remains day-to-day with a lower-body injury. ... McDavid, who ranks second in NHL scoring, 11 points behind Tampa Bay's Nikita Kucherov, has a career-high 115 points this season. McDavid has also set a career best with 74 assists.

Oilers: At the Colorado Avalanche on Tuesday.