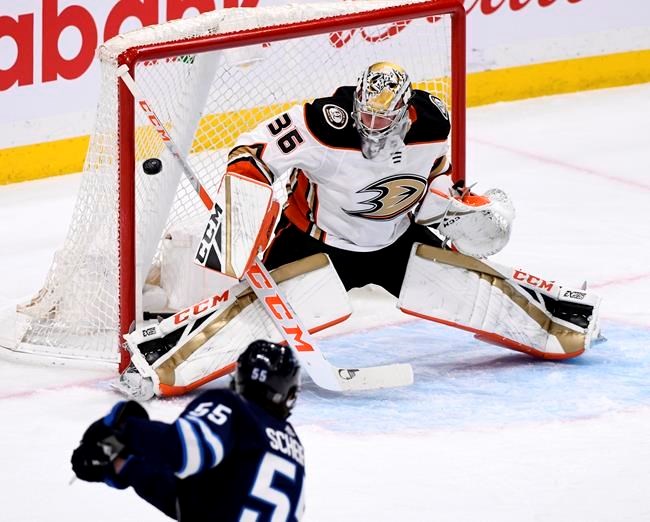 WINNIPEG — Nikolaj Ehlers isn't about to trade the ice for a boxing ring, but he was pumped about dropping the gloves during the Winnipeg Jets' 3-2 victory over the Anaheim Ducks on Sunday.

The six-foot, 172-pound Ehlers, known for his quick feet, clashed with Ducks captain Ryan Getzlaf, who's six-foot-three, 225 pounds. Both threw a couple punches in the brief, second-period bout.

"Out of character? This is my third (career) fight now," joked Ehlers, who's in his fifth NHL season. "I'm a fighter."

Ehlers said his own bad play sparked his mood.

"(Getzlaf) gave me a cross-check after I passed it and then, yeah, I think it was kind of a mutual thing," he said. "That's the way it goes sometimes."

Scheifele got the winner on the power play with 4:22 remaining in the third period when he beat Anaheim goalie John Gibson with a shot over his glove. It was Scheifele's 400th NHL career point.

Adam Lowry also had a goal for Winnipeg, which is 5-1-1 in its past seven games. Mathieu Perreault contributed a pair of assists.

Jakob Silfverberg scored his team-leading 11th goal and Devin Shore recorded his first of the season for Anaheim, which is 1-3-1 in its last five games.

Silfverberg tied the game 1-1 in the first period after Rickard Rakell forced a turnover and sent him a no-look backhand pass from behind the net.

"He's a special player, obviously," Ducks head coach Dallas Eakins said of Rakell. "And him and Silfverberg, it seems like they think out of the same brain because they've played so much together. But that was a good play, and it's an especially hard one to cover off."

Shore scored during a goal-mouth scramble to tied the game 2-2 at 8:04 of the third period.

"That's how a lot of the NHL is, is traffic now, pounding pucks to the net and trying to get sticks on it," Hellebuyck said. "I was prepared for it and I thought the team was, too."

"I thought he was great," Shore said of Gibson. "(The Jets) kind of had some pretty serious Grade As (scoring chances). It's no secret he's one of the best in the world."

Scheifele scored his 12th goal of the season with a one-timer that beat Gibson at 9:02 of the first. Silfverberg tied it up 32 seconds later

Jets forward Nick Shore, picked up on waivers from the Toronto Maple Leafs last Wednesday, made his Winnipeg debut.

Nick Shore started as the fourth-line centre between Joona Luoto and Logan Shaw, but briefly moved to the third line after Lowry took a puck to the hand and left the bench to get it checked out.

Lowry didn't show any ill effects when his high shot broke the tie with 1:51 remaining in the second. His third goal of the season ended a nine-game drought.

Getzlaf assisted on Devin Shore's goal, extending his point streak to three games with a goal and three helpers.

Scheifele's 13th goal at 15:38 tied him for the team lead in goals with Ehlers. Scheifele is also one point ahead of teammate Patrik Laine for most points with 29.

"What a helluva job by a little guy," Wheeler said. "That dude has got some fire in his belly, for sure. That was pretty awesome."

Jets head coach Paul Maurice joked that he sent Ehlers over the boards to take on Getzlaf, then added the Denmark native better keep his gloves on to avoid injury.

"That was foolish, wasn't it?" Maurice said. "But God bless him, don't do it again. Ever."