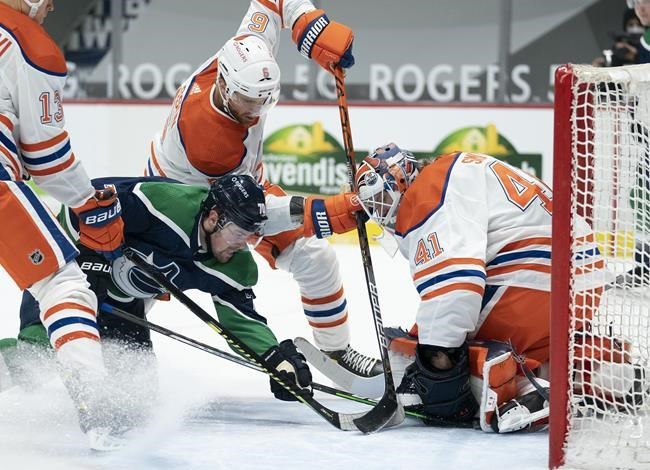 VANCOUVER — He notched his second shutout of the season Thursday night, but Mike Smith was simply happy to see his Edmonton Oilers chalk up another victory.

"Shutouts are hard to get, especially now with how many power plays there are, but it’s not just a credit to the goalie, it’s a credit to the team in front of him and what they do.”

There have been a lot of wins for Smith and the Oilers (14-8-0) recently. Thursday's result extended the team's streak to five in a row.

What's special, Smith said, is that the Oilers are collecting the victories in a variety of ways.

“I’m real proud of the group, how we’re finding ways to win games, different ways. And those are all experiences that are going to be valuable down the stretch," Smith said. "Another big two points.”

On Tuesday, Edmonton battled back from a three-goal deficit to top the Canucks 4-3. Two nights later, the team relied on special teams to earn a W.

The Oilers' penalty kill stopped Vancouver (8-14-2) from capitalizing on four power plays. At the other end of the ice, Alex Chiasson and Jesse Puljujarvi scored with the man advantage.

Connor McDavid put away an empty padded his leads atop the NHL's scoring race by putting away an empty-netter with 23 seconds left on the clock.

The Oilers went up 2-0 midway through the third with a power play dagger after Vancouver's Antoine Roussel brought down Connor McDavid and was called for hooking.

Leon Draisaitl sent a shot toward the Canucks net and Canucks goalie Thatcher Demko made a pad stop. He couldn't corral the rebound, however, and Puljujarvi found just enough space between the goalie and the post to pop the puck in.

"Special teams were the difference in the game. Our PK did an excellent job," said Oilers coach Dave Tippett. "(Smith) made some excellent saves for us, but our PK was doing whatever it took to keep it out of our net. Our PP got a couple of big goals, a couple of hard-scoring goals in front of the net, which was good to see."

The Canucks' best chance of the night came in the second period when winger Jake Virtanen unleashed a wrist shot from in tight. Smith was forced to make a diving stop, lunging sideways across the net and kicking his left skate up to boot the puck out of harm's way.

Smith also notched a shutout on Feb. 11 as the Oilers topped the Montreal Canadiens 3-0. Thursday night's was the 41st of his career.

The Oilers have been stronger mentally recently, said Ethan Bear, who returned to the lineup Thursday after missing nearly a month with a head injury.

“When we get those leads, we’re trying to play a more structured game," said the defenceman. "And that’s the key, especially if we want to be a deep playoff team, we’ve got to learn to close out games and I think we’re doing that right now. And that shows that we’re really maturing. And that’s a good step for us.”

Despite the final score Thursday, Demko was a force in the Canucks net, stopping 32-of-34 shots.

Still, the goaltender said there are areas where each player on the team can improve — Demko included.

“It's obviously hard. It's kind of the same thing that we've been talking about, playing a pretty good game and not being able to find the back of the net," he said.

"I thought we created really good chances and it's just kind of the way the game went, so just like I've said in the past, continue to get better and continue to keep working at the things that we know that we can improve on."

The result was yet another tough blow to a lacklustre season for the Canucks (8-14-2) who have now lost four games in a row.

The Canucks had a lot of good looks on Thursday, but just couldn't bury the puck, said coach Travis Green.

It's a different scenario than earlier in the season where the team was losing games because they weren't playing well, he added.

"From two standpoints, from a coach's standpoint, the frustration level is higher when you're not playing well," Green said. "When you're playing well and not getting results, you tend to feel like you're banging your head against the wall and you feel for your players a little bit and I think it's probably harder on the players as well.

"When they go home at night and they know they've played a pretty good hockey game and didn't get the result, it's hard. When you don't play well individually that's hard as well, so it's a little bit different for both but either way is difficult."

The Oilers will be back in action on Saturday when they face the Leafs in Edmonton. The Canucks are set to battle the Jets in Winnipeg on Monday.

NOTES: Travis Hamonic returned to Vancouver's lineup after missing 18 games with a head injury. … The Oilers placed William Lagesson on injured reserve Thursday. The defenceman suffered an upper-body injury in Edmonton's 6-5 loss to the Jets back on Feb. 15. … Jayce Hawryluk played his first game for the Canucks. The 25-year-old forward signed with Vancouver as a free agent in October.

This report by The Canadian Press was first published Feb. 25, 2021.