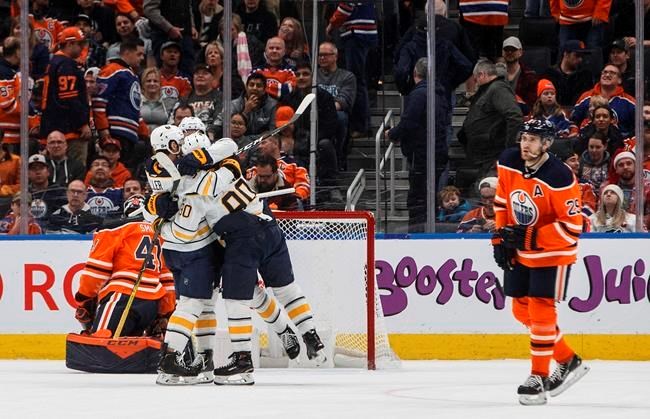 EDMONTON — It was a win that the Buffalo Sabres really wanted to go out and get for head coach Ralph Kreuger.

Colin Miller scored in overtime as the Sabres emerged with a 3-2 victory over the Edmonton Oilers on Sunday. The game marked the return of Kreuger to Edmonton after he coached the Oilers for the lockout-shortened 2013 season, before famously being fired over Skype and replaced by Dallas Eakins.

"We talked about it in between periods and this morning and we wanted to get a win for him," said Kyle Okposo. "We know how much it meant to him. Things didn't end well for him here and he won't say it, but I know that this game meant a lot to him."

Krueger confirmed that this win meant more that most.

"It's real nice, they know the story and they know the history," he said. "We have an honest culture in there and we're just out for each other. It was a beautiful victory here especially because of the character we showed to get it."

Miller took a feed through the crease from Marcus Johansson to score 1:13 into OT. Jack Eichel picked up an assist on the play to extend his point streak to 13 games.

Riley Sheahan and Joakim Nygard replied for the Oilers (18-10-4), who have lost four of their last six games.

"It's tough to say what's wrong," said Edmonton defenceman Oscar Klefbom. "We've tried to get a winning streak going here, but it's not going to happen if we're not ready from the start. We can't expect really expect to always be coming back from 2-0.

"We have to be better. We should be in the front seat in a game like this and outwork these guys, especially when we've been focusing on getting a win streak going."

Larsson picked up a big rebound in front seven minutes and put it five-hole on Smith for this third of the season and a 2-0 Sabres lead.

Edmonton got a goal back eight-and-a-half minutes into the second period as Nygard sent Sheahan in on a breakaway and he sent his first goal of the season while snapping a 30-game goalless streak by tucking the puck through the legs of Sabres starter Linus Ullmark.

Nygard tipped his second NHL goal in off a shot by Darnell Nurse to tie it in the dying seconds of a power play near the 16-minute mark of the middle period.

A scoreless third period sent the game to overtime.

Both teams are back in action on Tuesday as the Oilers close out a four-game homestand against the Carolina Hurricanes and the Sabres return home to take on the St. Louis Blues.

Notes: It was the first of two games this season between the Oilers and the Sabres, with the second contest taking place on Jan. 2 in Buffalo… Forwards Ryan Nugent-Hopkins and Zack Kassian returned to the lineup for Edmonton, with Nugent-Hopkins missing six games with a hand injury and Kassian out for three games with a bad back… Matt Benning (head) remained out for the Oilers while the Buffalo injury list included Matt Hunwick (neck), Vladimir Sobotka (knee), Tage Thompson (upper body) and Rasmus Dahlin (concussion).

Sonny Bill a question-mark ahead of Toronto Wolfpack pre-season game Sunday
Jan 17, 2020 9:27 AM