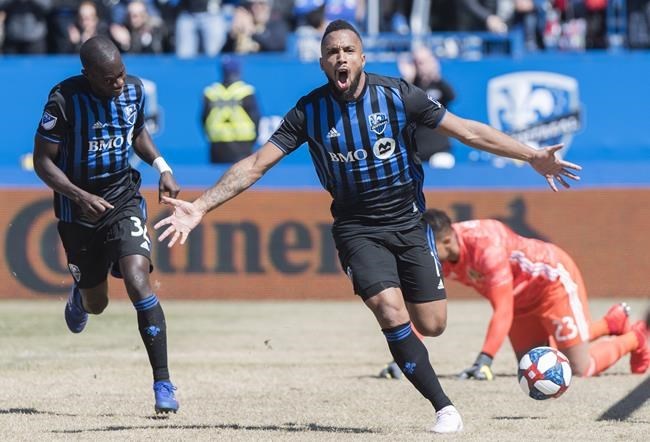 MONTREAL — All-star snubs aside, the Montreal Impact are counting on collective performances to stay in playoff contention.

The Impact (8-7-3) will kick off the second half of their Major League Soccer season against the Portland Timbers (5-7-2) on Wednesday night at Saputo Stadium.

"In the past, the global perception was that we relied on Nacho (Piatti) to create for us and win games," Bush said. "I think it overlooked how we were as a team many times. So for us to be in second place in the conference and not have an all-star, to me it shows that collectively we've been good and that's what we need to continue to do."

Bush was then asked if the exclusions could serve as motivation.

"Maybe for some guys, personally, (it) will be," Bush said. "If guys feel they were snubbed or there's some credit that they deserve they're not getting individually, that's up to them. Hopefully, it doesn't affect them within the team. I think for the most part we have a team that doesn't think that way."

The Timbers will have one player in the all-star game: defensive midfielder Diego Chara. The 33-year old has two assists in 12 games for his club, which is three points back of the last available playoff spot in the Western Conference.

Portland is coming off a 4-0 thrashing of the Houston Dynamo. One of the Timbers' newest signings, Brian Fernandez, has proven to be a scoring threat. The former Mexican league forward has goals in four consecutive matches since joining the team in early May, equalling a league record.

"We know the quality that they have, so we always have to be alert. Even when we have the ball," Shome said. "Just being aware of where those players are. (Former MLS MVP Diego) Valeri, they've got that new guy ... (Brian) Fernandez who's scored a lot of goals. You've got to be careful with them. They've got a lot of good attacking pieces."

The Impact will continue to be short-handed as a number of players are still away for international duty. The biggest absences will be felt in the middle of the pitch as midfielders Samuel Piette and Micheal Azira won't be available, which means the Impact might have to rely on youngsters Shome and Ken Krolicki alongside veteran Saphir Taider.

"If that's the case, then I'll be ready for it." Shome said. "But you never know. We also need to have that balance offensively. Wherever the coach plays me, I'm just going to make sure I'm ready to play in that position and do what we need to do to win."

LENGTHY LAYOFF: Montreal has been off since June 5 when the Impact beat the Seattle Sounders 2-1 at Saputo Stadium. This contest finishes off a three-game homestand (Montreal is 1-1 so far).

HOME COOKING: The Impact play 10 of their final 16 games at home. Montreal has lost just three times in its last 13 games at Saputo Stadium.

NICE HONOUR: Portland midfielder Diego Valeri was named MLS player of the week for Week 16 after having a hand in all four goals in the Timbers' 4-0 win over Houston. The Argentina native was MLS MVP in 2017

LET'S MAKE A DEAL: The Impact made a move Tuesday, acquiring an international roster spot from the Colorado Rapids for US$100,000 in general allocation money.